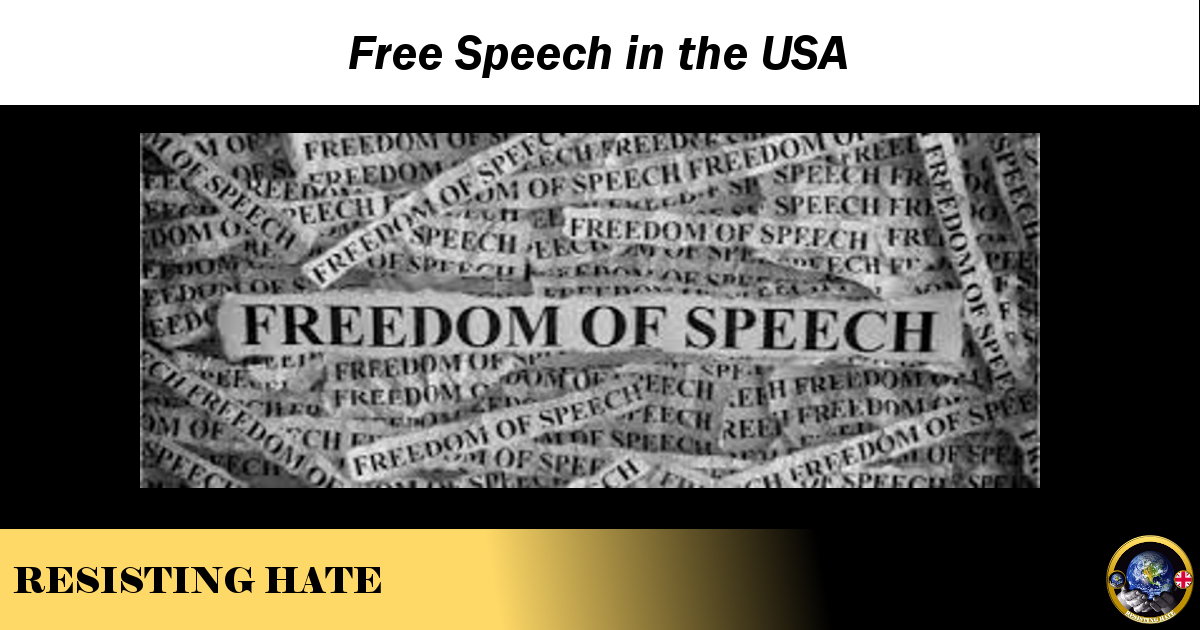 Edited 13.7.2020. One of our younger readers has been doing some research on free speech and asked if we could add a link here to the information she found on the Bill of Rights. We’d like to say thank you for sending this info in to us and great to see young people taking an interest in their rights and the rights of their fellow humans.

Written by a guest writer and first published here. Reproduced with permission.

Free speech may be something that we take for granted in the United States, but do we actually have the freedoms that we think we do? Recently, free speech has come under scrutiny. Many people are asking whether free speech is harmful to others, and if there are times when speech should be censored in order to protect individuals, groups of people, or the United States government.

In the United States, free speech refers to the First Amendment Rights in the Constitution.

The First Amendment states, “Congress shall make no law respecting an establishment of religion, or prohibiting the free exercise thereof; or abridging the freedom of speech, or of the press; or the right of the people peaceably to assemble, and to petition the government for a redress of grievances.”

United States law allows people the right to practice religion freely, speak freely, for the press to speak freely, and for people to assemble or petition peacefully. These rights are foundational to the way the United States works, and they were exceptional when the founding fathers wrote them into the constitution.

Still, they are not without controversy and are often called into question when other people feel that speech is harmful, offensive, or dangerous.

IS ALL SPEECH OKAY IN THE UNITED STATES?

Contrary to popular opinion, there are times when free speech is not allowed in the United States. Below is a list of some of those exceptions.

Free speech was limited in 1919 after a decision was reached about the Supreme Court case, Schenck v. United States. The court determined that free speech would not be permitted when it presented a “clear and present danger” to society.

The case in question was about to two individuals by the names of Charles Schneck and Elizabeth Baer. Shneck and Baer were socialists and they were distributing leaflets urging the public to disobey the United States draft. The Supreme Court ruled against Shneck and Baer’s right to freedom of speech in this case because they believed that the government required deference during wartime.

Famously, Justice Oliver Wendell Holmes brought up the “clear and present danger” wording and compared their actions to shouting “fire” in a crowded theater.

OTHER RESTRICTIONS ON FREE SPEECH

WHEN FREE SPEECH IS QUESTIONED

Free speech is not always a given, especially when it causes harm or offense to others. When these instances occur, people begin to ask if freedom of speech trumps the feelings of others, or if the basic right of free speech is inherently more valuable.

Below are some current issues and concerns surrounding the first amendment right to free speech. One should also understand the usage of fake news.

In August of 2017, a group of white nationalists began protesting the removal of a statue of Confederate General, Robert E. Lee.

Many remember the violence that resulted between the protestors and anti-protestors during the event, but another debate came to the surface. Do extreme groups have the right to free speech?

Many people argue that they lost their right when members of the protest fell to violent acts. But was the free speech to blame, and should the city of Charlottesville have revoked their permit?

From a legal perspective, the lines are sometimes hard to determine. In 1969, the Supreme Court ruled in a case called “Brandenburg v. Ohio” that inflammatory speech is lawful as long as it doesn’t incite “imminent lawless action.” Or, in other words, it might even be okay to mention lawless acts so long as the intent isn’t to immediately cause listeners to act on those words.

From a moral and ethical perspective, some people argue that free speech laws are slated against minorities. Their belief is that hate speech causes rippling and far- reaching negative effects. In an op-ed in the New York Times, K-Sue Parks asks, “Could prioritizing First Amendment rights make the distribution of power in this country even more unequal and further silence the communities most burdened by histories of censorship?”

Free speech on campus has been a growing debate in recent years. A debate has been sparked because of disinvited speaking guests from both left and right leaning groups, and because administrators and students are advocating for speech codes at universities.

Should college campuses limit free speech, and do they have the right to do so? There are many different instances when free speech on campus may come into question. Many of these instances stem from issues of race, gender, sexual orientation, religion, and politics.

Some people argue that students, especially minorities, should not be subjected to hate speech and microaggressions that make them feel uncomfortable or unsafe in their place of learning. Others argue that free speech should not be limited in any way because it threatens the rights of all people.

Some people even argue that due to neurodiversity, it’s not possible for all people to follow strict speech codes. The argument is there are many brilliant minds who may not follow or comply with normal social standards would be missed because of overly strict limitations on speech. As an example, someone who is on the Autism spectrum may not be allowed to speak to a college campus, despite the valuable knowledge they could impart, because of their inability to conform to strict speech expectations.

The internet and technology are growing at such a rapid pace that many argue that United States law is behind the times. Internet giants like Google, YouTube, and Facebook hold the ability to censor content and limit speech, but legally should they be allowed?

Since they are private and not public businesses, some believe that they should be allowed to censor content as they see fit. Others believe that they hold such control over the way that United States citizens interact with information, that their censorship guidelines are potentially damaging to free speech.

For example, after the investigation of the Russian interference in the 2016 Presidential election, many people began to realize the power of persuasion that social media sites have over people’s opinions. Facebook and Twitter have now taken big steps in getting rid of fake accounts on their sites in hopes of avoiding this issue in the future.

In terms of censorship, there have now been claims that enterprises like Facebook, Twitter, and Google, have been intentionally shut down conservative-leaning groups and individuals. According to Breitbart, “Big Tech monsters like Google and Facebook have become nothing less than incubators for far-left liberal ideologiesand are doing everything they can to eradicate conservative ideas and their proponents from the internet.” Some wonder whether or not the media is good or bad for society?

Whether these companies are intentionally targeting conservative-leaning groups may be less important than whether or not they should be allowed to. Should Facebook and Google be considered public spaces where people are free to express any and all types of speech regardless of whether or not it aligns with the platform’s policies? Or, should they be managed as the individual companies see fit, regardless of free speech rights?

THE ACLU AND WHAT IT STANDS FOR

The ACLU is an organization dedicated to defending the rights to free speech.

The ACLU was established in the early 1920s in response to the United State’s reaction to rising fears of communist radicals. In the year 1919, Attorney General Mitchell Palmer took the initiative to round up individuals believed to be radicals. According to the ACLU, “Thousands of people were arrested without warrants and without regard to constitutional protections against unlawful search and seizure. Those arrested were brutally treated and held in horrible conditions.”

The event, now known as the “Palmer Raids,” inspired a small group of people to establish a group called the American Civil Liberties Union. The ACLU has been defending the right to free speech ever since.

WHY THE ACLU DRAWS CRITICISM

The ACLU has a long history of defending all sorts of free speech in the United States. They’re known for holding politicians accountable, and they gained favor from the political left for promising to hold President Trump and his administration accountable in court. Their organization champions many left ideals like immigration rights, LGBT rights, and racial justice.

What makes the ACLU politically confusing for some is that they also advocate for the rights of everyone, including neo-Nazi’s, the Ku Klux Klan, and controversial person, Milo Yiannopoulus. In addition, the ACLU chose to defend Unite the Right’s choice to protest in Charlottesville, and went to court for them when the city attempted to revoke their protesting permit.

In response to criticism over their choice to represent groups from both the far left, and the far right, the ACLU stated, “Such criticism comes with the territory, and does not dissuade us from defending the Bill of Rights, no matter how unpopular our clients may be.” They went on to say, “We are defending a student group in San Diego that was penalized for publishing a satire of ‘safe spaces’ that some students and faculty deem offensive. We disagree sharply with those who engage in terrorism, criminal activity, homophobic or racist speech, or attempts to dissuade women from obtaining abortions. Yet we have defended the constitutional rights of terrorists, criminals, anti-gay and racist bigots, and right-to-life advocates. We don’t burn flags, but we defend the rights of those who do.”

SHOULD FREE SPEECH ALWAYS BE PROTECTED?

As long as people live together in a society, the right to free speech will cause tension. Sometimes speech is so offensive or potentially damaging to people that it is natural to want to shut down its negative effects. On the other hand, the United State’s freedom of speech laws is precious and revolutionary at their inception.