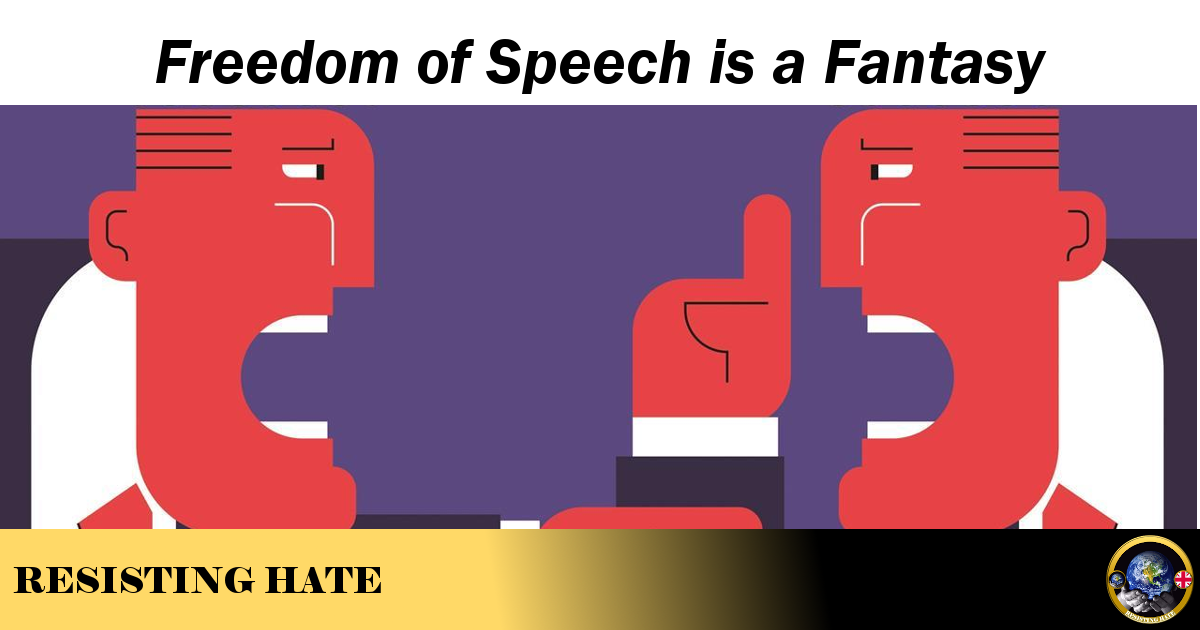 Absolute freedom of speech doesn’t exist and it never will. A world of free speech would soon descend into chaos and anarchy. We are bound by social convention, the law and an awareness of public safety and most of us follow both these actual and implied rules on a subconscious level on a daily basis.

A little honest introspection would reveal that nobody actually wants speech to be entirely free either. The hoary old example that is always dragged out in discussions of free speech is the shouting of ‘fire’ in a cinema. But social media has escalated the potential damage caused by reckless speech. Do you really want someone to have the right to post your picture where potentially millions of people might see it with the caption ‘Paedophile’?  No. But if you want absolute free speech that is what you are sanctioning.

What most people believe in is free speech on a spectrum. And, once we acknowledge this, the debate starts to become a discussion about where we as individuals draw our own lines in the sand on that spectrum.

Those who defend free speech at all costs see speech in a vacuum and fail to make the connection between the spreading of hate and the real world consequences of hate. They speak of offence and hurt feelings but show no understanding of the notion of causality or the impact of hate speech on attitudes and beliefs. It is naïve to deny that hate speech plays a key part in the radicalisation of extremists. One only has to look at the reading material of Thomas Mair or the social media follows of Darren Osborne to understand there is a clear link between reading hate, believing hate and then, in some extreme circumstances, acting with violence upon that hate.

It is interesting that the most aggressive promoters of free speech tend to be the people who already have it. This was illustrated at the Day of Freedom event in London on May 6th. It is my view that the event’s speakers were pretty much just a bus load of racists crying about the fact that they lose social media accounts when they make Islamophobic comments but, that aside, it cannot be denied that many of the speakers at the event were relatively high profile individuals. Sargon of Akkad has 796k You Tube followers, Tommy Robinson has 713k likes on his Facebook page (he lost his Twitter account after Resisting Hate mass reported it for hate speech), Milo Yiannopoulos has 2.3 million Facebook likes.  These are people who do have voices and they have established platforms upon which to air their thoughts and opinions. Free speech? Just how much free speech do these media personalities want?

What I want to see more emphasis on is using speech with responsibility. Particularly when individuals do have such big audiences or such a large social media presence. The lone voice on Twitter with a handful of followers may not do much harm but when people with massive followings like Robinson or Yiannopoulos use hate rhetoric there is a danger that what they say will influence a large number of people. I have linked here some genuine examples of comments on Facebook pages. This is indoctrination in real time. This clear evidence of radicalisation is the consequence of allowing people to preach hate.

Today Donald Trump has been videoed referring to a group of human beings as animals. This is probably the most high profile person alive in the world today and yet he feels he can make the kind of comment that most of us would associate with the origins of Nazi Germany. Are we so quick to forget that the path to the Holocaust started with the dehumanisation of human beings? Are we so ignorant we cannot appreciate the consequences of this kind of speech?

Responsibilities go hand in hand with freedoms. I am not calling for views to be silenced but I am making a clear distinction between hate speech and free speech. You have the right to hold any opinion you want. You have the right to express that opinion. But you have a responsibility to express that opinion in a manner that does not abuse, defame or incite violence against others. And I’d add that if you cannot express your opinion without the use of hate speech then I would strongly question whether your opinion is worth holding in the first place.