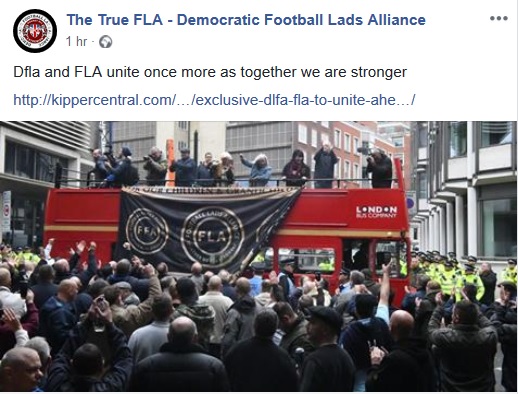 After their falling out the DFLA and FLA announced tonight that they have decided to buddy up again. As one of the RH team friends commented ‘just in time to cause trouble in London on the next free Tommy demo..’

Good evening members of both the DFLA and FLA.

Negotiations have been ongoing over the last month or so with regards to where we go as organisations. Do we continue as separate entities or come together in one shape or form. In all honesty these negotiations have been deep and were holding many caveats that were not suited to all parties.

Not to be deterred negotiations continued. One of the main people behind the desire to push both movements forward was Mark Boxer who sadly lost his battle with cancer last Friday.

Mark’s loss has had a profound affect on the football lads community as he was fully committed and wished for the Alliance to succeed in one form or another. We were made aware that it was one of Mark’s final wishes that we could unite both groups. When we heard this everyone to a man and woman within the DFLA along with the Admin of the FLA took stock and realised the time is now to do this in Mark’s honour.

What this will look like moving forward is anyone’s guess however plans are already afoot to ensure this is done for everyone’s benefit. I say everyone as that is the ethos of the DFLA. Everyone’s opinion will be heard and valid.

We feel it is only fitting that Mark Boxer’s name will be remembered for posterity, what shape or form this takes remains to be seen.

This should not be seen as a take over in any way by the DFLA, more of a coming together for the right reasons. We will remain Democratic however we do have rules and guidelines. By respecting these rules and guidelines we will maintain our professional stance which is paramount to our combined and continued success.

We would like to take this personal opportunity to thank the following FLA committee members for their support and input over the past weeks:

These guys have agreed to remain on the page as moderators and will help us moving forward.

We all look forward to working with every member and sharing our successes and our future approach.

Further announcements to come over the coming 48 hours.

Big Jim on behalf of the DFLA Council and combined FLA Moderators.

Mind you, looking at the reaction to the news we are not holding our breath that this unity will last very long. Probably won’t make it much past the next Tommy cry fest. 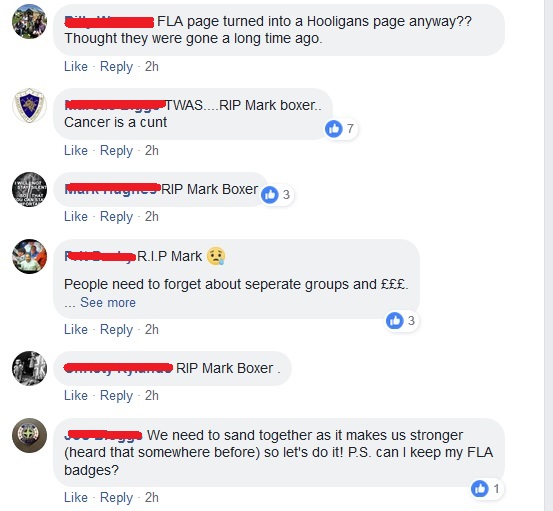