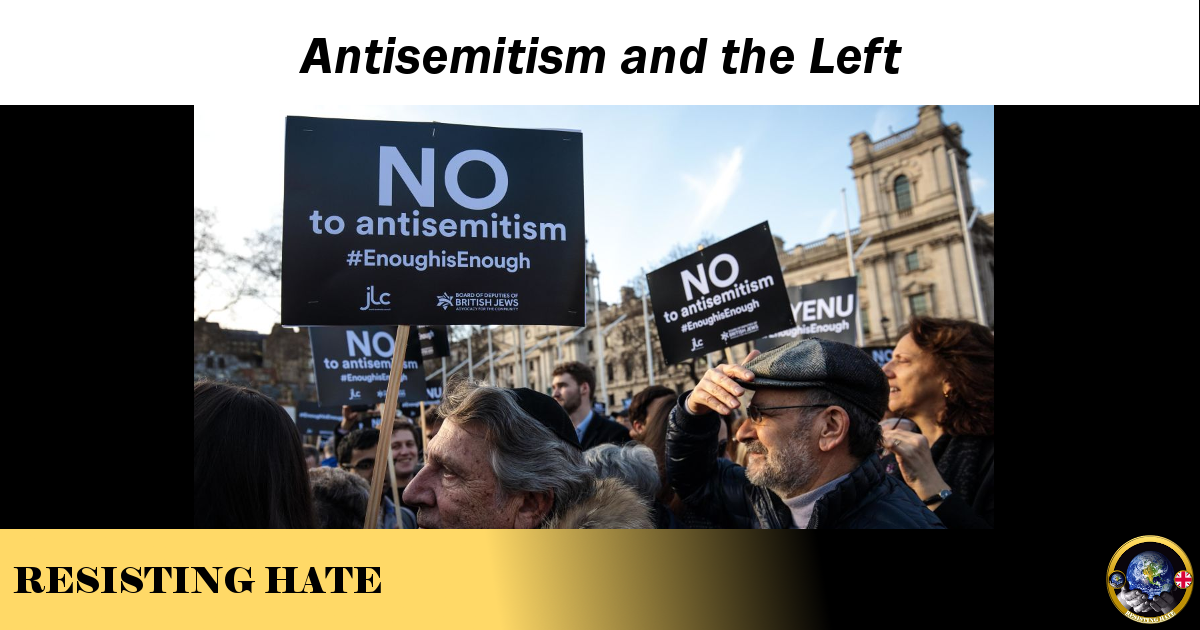 Like many I am keenly interested in understanding the relationship between the Left and antisemitism which has become particularly topical of late not least through the recent media attention on the Labour Party and Jeremy Corbyn and increasingly heated dialogue which is spreading through social media. On the one hand, much of today’s vitriolic dialogue on the topic can be reduced to simple, almost binary debate where one group claims one position and the other group claims another. However, on the other hand, deeper examination reveals historic and geopolitical complexities influencing the debate around attitudes towards the State of Israel, Zionism, Palestine, Netanyahu (and his predecessors), “one state” versus “two state” solutions and the very definition of antisemitism itself. There are numerous heavyweight books and academic papers on the topic few of which, having skimmed some conclusion pages, ultimately escape the authors’ bias no matter how nuanced. So, I shall just focus on my personal perspectives which tend to be at the less complicated end of the scale.

What is undeniable is that antisemitism, like Islamophobia, falls within the boundaries of both religious and racial hatred which has endured for centuries and culminated in the acts of mass murder and genocide recorded in history, the Holocaust. Yet despite these atrocities, antisemitism has not only continued but has become resurgent in many countries throughout Europe and beyond with attacks on Jews, Jewish institutions and memorials becoming a worryingly regular occurrence. In an atmosphere redolent of the 1930s, many Jews in Europe, and increasingly the UK, are fearful for their identities and their lives as the rise in antisemitism poses an existential threat which many had hoped could never be repeated.

Describing myself as “progressive left”, I work with Resisting Hate in the hope that I contribute to improving tolerance of race and religion through actively fighting against such hatred and bigotry whether against Jews, Muslims, LGBQT or other minorities. In my experience the perpetrators of such victimisation are almost exclusively from the Right and most particularly from the Far Right, so I was surprised and puzzled when I saw significant elements of the Left facing sustained accusations of antisemitism. That surprise turned to shock when, more recently, I found myself targeted by online trolls for apparently having the audacity to send a tweet which simply voiced support for Palestine whilst expressing disdain for Israel (by which I specifically mean the Israeli Government).

It hardly seemed fair that expressing sentiment for the Palestinian treatment by Israeli politicians could be viewed in any way as antisemitic, to me it was an utterly ludicrous and baseless assertion (just as it’s ludicrous to be accused of being anti-British for not supporting the Tory Government). However, as I learnt, this view has traction with both the public politicians with, for example, the prominent Labour MP, Margaret Hodge, having recently made an appalling statement that there was a “fine line” between supporting Palestine and antisemitism. I could not believe that and the interview where she made those comments remains etched in my mind.

Now a majority of people would admit that Israel has long flouted international conventions when it comes to the Palestine which it has justified through claims of self-defence and entitlement based on the tragic history of the persecution of the Jews. Like many countries, self-defence is a legitimate concern and, in the case of Israel, a fear of continued persecution of the Jews is perfectly reasonable, but in neither case should these be used to justify the aggression against the Palestinians as evidenced by the numerous United Nations resolutions. Yet, despite the UN’s stance, Israel’s justification has proved successful in silencing criticism from other Governments, apart from the occasional chorus of virtue signalling. However, it has not silenced the criticism from many groups and individuals on the Left to Israel’s policies.

A far more effective way of silencing individuals’ criticisms is to vilify the individuals concerned, quite literally adopting the “name them and shame them” principle.  It’s crude, it’s simple, it’s effective, it’s nasty, it’s particularly prevalent on social media, it’s extremely well organised and it’s a lie. On social media it comprises groups and individuals who search out anyone expressing criticism of Israel, or support of Palestine, and then dogpile that person with abuse and accusations of antisemitism. Celebrities, politicians and other commentators pick it up and then it goes viral and enters the mainstream. Most of the groups and individuals involved are strongly pro-Israel, often quite openly although sometimes through less transparent relationships although I have not seen direct evidence of actual interference by Israel despite some allegations. Interestingly, when I questioned some of these online trolls about their view of Jews who criticise Israel they simply responded by labelling them as “self-loathing Jews”.

Then, of course, we have the Labour Party which is now considered by many to be antisemitic as is their leader, Jeremy Corbyn, a long standing critic of Israel and a staunch pro-Palestinian. There doesn’t seem to be much doubt that there is a degree of antisemitism within the party, but there’s considerable anecdotal evidence that it has been exaggerated through the “pro-Israel lobby” of propaganda trolls, Jewish MPs, celebrities and media commentators all of whom are keen to silence political criticism. I personally don’t believe Jeremy Corbyn is in any way antisemitic, but I do believe that he’s feared for his views, especially by Israel, if he becomes the British Prime Minister.

It’s interesting to consider why Left antisemitism appears to be so widely accepted outside of the “pro-Israel lobby” and, although I don’t know the answer, I suspect it’s a combination of political orientation, media bias and historical context which informs so many peoples’ belief. I also think that because Jews are increasingly fearful throughout many countries, they associate Israel as being on their side, an insurance policy with whom they have (often non-political) roots. So when the media keeps telling them that criticism of Israel = antisemitism it’s all too easily internalised as it was intended to.

Another interesting perspective from the authors an academic publication I found was that “criticism of Israel by the Left is employed as a cover for antisemitism”. Well I can certainly say testify against that view, as can a large part of the world, but what is surprising is that this subjective conclusion is from academics which serves as an example to the innate bias I mentioned earlier.

In a final twist of the tail, the International Holocaust Remembrance Alliance (IHRA) definition of antisemitism has become very much a standard adopted by many countries and Governments, including the UK. This states that “Antisemitism is a certain perception of Jews, which may be expressed as hatred toward Jews. Rhetorical and physical manifestations of antisemitism are directed towards or non-Jewish individuals and/or their property, toward Jewish community and religious facilities”. Most people would agree that this is reasonable and workable definition. However, the IHRA then qualify the definition with examples including one which states that manifestations of antisemitism might include “targeting the state of Israel” (although it does allow criticism to the extent that it is similar to that levelled against any other country).

I have no reason to assume that the IHRA have any ulterior motive, but to deny political criticism of Israel is simply not reasonable and their attempt to enable exceptions just creates ambiguity. The notion that critics of Netanyahu’s Israeli Government are automatically branded as antisemitic is ridiculous; it’s precisely this problem the Labour Party had when asked for its acceptance of this definition. Justification for these concerns was underlined when one of the authors of the IHRA definition, a US attorney by the name Kenneth Stern, said publicly that it’s not fulfilling its purpose and should be changed, stating that it had been used to supress free speech. Stern also cited some examples in the UK where debate had been stifled because of this definition in a manner he described as a “chilling and McCarthy-like”.

So, please, enough of these attacks, they’re unfair, they’re hurtful and they’re deeply disrespectful to those of trying in our own ways to fight antisemitism.