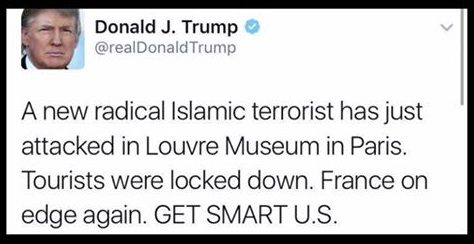 So………let’s see what’s happening in the world of Trump….

1. He has been crying as his “Muslim Ban” has been lifted by the courts….that hasn’t given him much to smile about. In fact, as usual, you can see the fallout from that by looking at his Twitter account 10 minutes after the decision was made.

2. There was a tragic attack in Paris. (I say tragic as it’s tragic that the actions of one person have again led to the demonisation of an entire religion by the right wing.)

3. After the attack, Trump took to Twitter to confirm that an attack had taken place (thanks Donny, hadn’t noticed that fact by looking at the news you know). He used it to justify his decision to close his borders to all those wicked nasty Muslims that he thinks want to attack America.

4. The Associated Press report that the French prosecutor involved in the case has confirmed that that man with the knife was from the UAE and came to the country as a tourist on the 26th January.

Now…..let’s see, there are 7 countries that Trump wants to do “extreme vetting”/a Muslim ban on. Ok….so, this person would have been caught up in this vetting because he is apparently a Muslim and is from……..bugger……the UAE is one of Trump’s “safe” countries……hmmmm…..that kinda scuppers the “excuse” that he has for the border issue. He could of course ban all Muslims from all countries entering the country but, hold on, he has business interests outside the core of 7 countries that he has on his ban list….so that won’t happen will it?????

Perhaps it is time for him to realise that:

1. He is unpopular. Not only is he unpopular all over the world but he is also unpopular within his own country and his approval rating is plummeting to a record low – lower than any other president in history and (according to CNN) Trump is the only President to hold a net-negative rating this early in his tenure.

2. His constant use of Twitter makes him look like a petulant child. In fact, if any of you are on Twitter, I’d invite you to not only see us on there (our details can be found on my pinned post on my profile – @HalalKitty2) but also to take a look at @VicenteFoxQue who was the Mexican President from 2000 to 2006, you won’t be sorry to do so.

3. That whinging about the press being mean to him is a joke. And insisting that Fox News is good and the New York Times is bad is the same as Farage and Britain First insisting that the Daily Mail is the paper for the discerning reader – total nonsense. (If you love fact checking like I do, go and see Exposing Britain First & IRBF as there is plenty there to enjoy)