Anne Marie Waters is the director of Sharia Watch, an anti Islam organisation with links to Pegida UK, Tommy Robinson and (after being rejected by Labour) UKIP.

We encountered Ms Waters on Twitter the other day and engaged in a brief debate with her.

We were discussing the news headlines in relation to child abuse and grooming gangs in the UK. This has been a great concern to many people and we explained that our group oppose paedophilia from any community or religion.

We have strong views on child safety and support tough penal sanctions when children are found to have been abused or harmed. But Anne Marie seemed less interested in the children than we were as she repeatedly insisted on making the discussion about her anti Islam views. 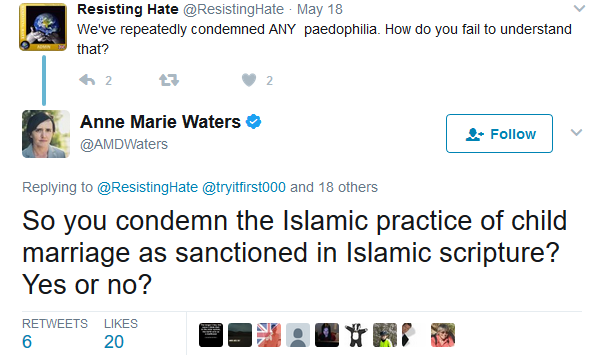 We explained that we do not support child marriage because it is both wrong and illegal but Anne Marie was only interested in using the discussion to justify her negative views toward Islam.

We had to repeat ourselves to her followers who also seemed keen to jump on the anti Islam bandwagon.

Anne Marie went on to try and justify her hate by claiming she knows more than we do. A rather juvenile debating tactic but to be honest by this point our hopes of a good quality debate were not high.

We explained our philosophy. The idea of integration between communities is very important to us and integral to our group belief that all people are equal. But the concept of division was just a buzz word as far a Anne Marie was concerned. She was much more interested in telling us about the “religious misogynist rapists” that she believes all Muslims to be.

At this point Anne Marie became angry when we pointed out the flaws in her logic and told her we believed her conclusions about Muslims to be erroneous. 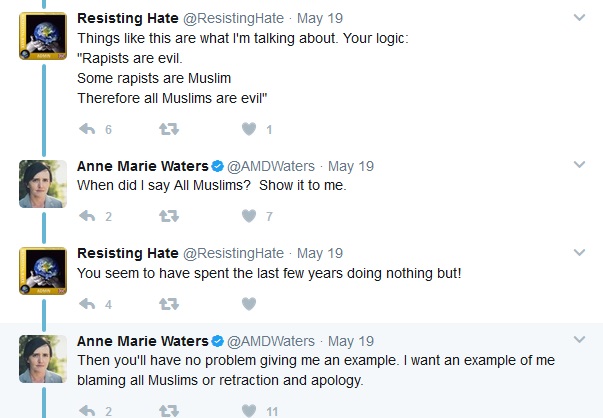 She challenged us to prove that she blames all Muslims so we showed her this. 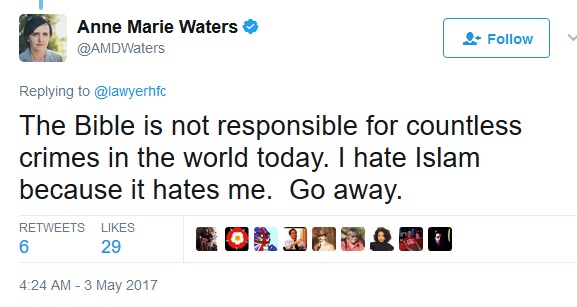 We had made our points succinctly and (I like to think) politely but at this point Anne Marie decided to resort to the good old argumentum ad hominem and start to insult us rather than debate the points we were making.

Our level of intelligence seemed her choice of theme for some time as she struggled impotently to bluster her way out of the hole she had dug for herself.

And then of course her followers got in on the act… 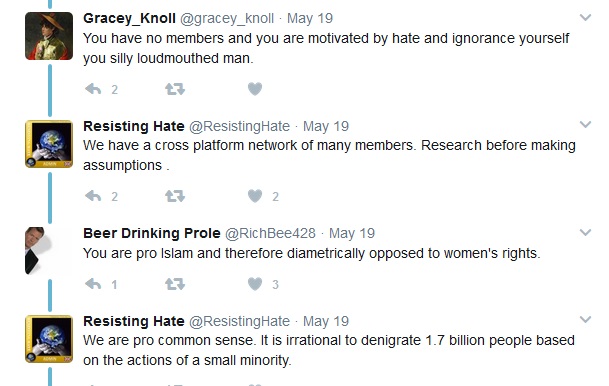 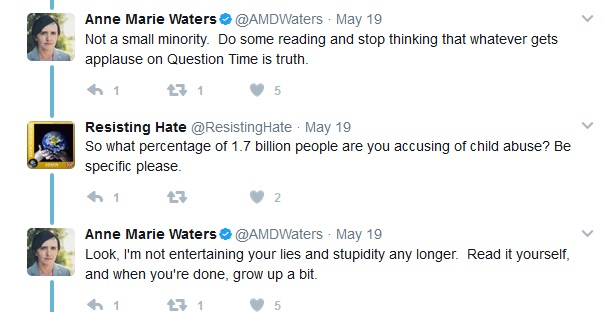 And yes, you guessed it…Blocked

So there you have it. Not the most eloquent display of intellect but then to be fair we weren’t really expecting it from a UKIP candidate. Bias, bigotry and balderdash seems a fair summary of her views…