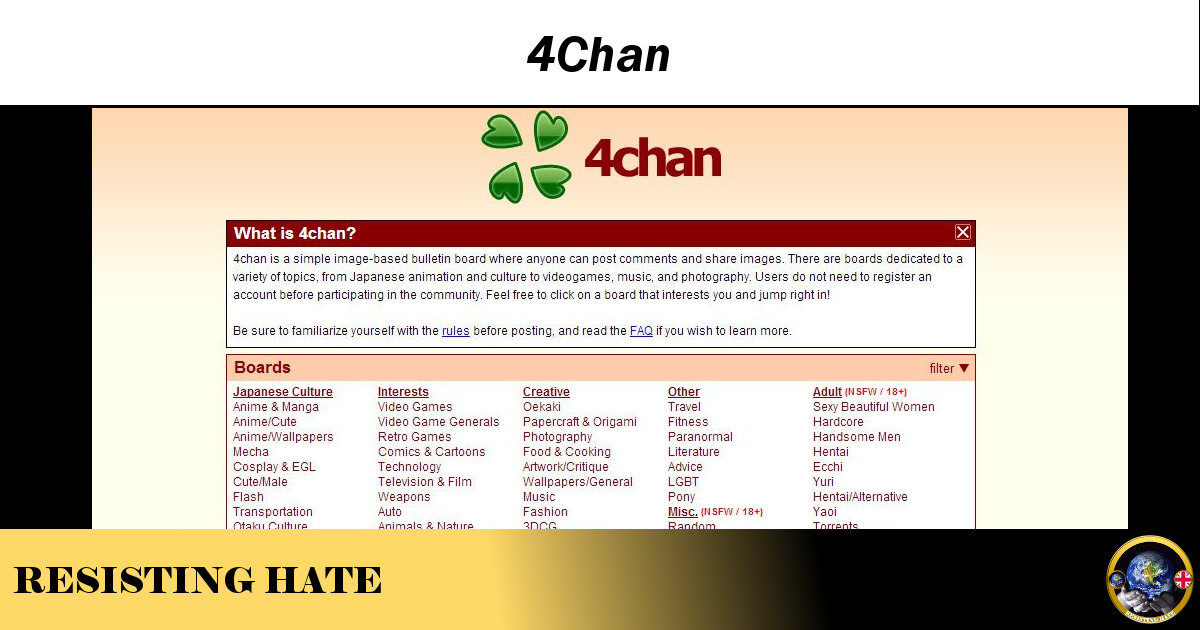 4Chan is a controversial anonymous social media message board site founded by Christopher Poole and styled on Japanese forum Futaba Channel. 4Chan is allegedly the part of the internet that spawned the activists of Anonymous. It is often described as the underbelly of the internet, a reputation that its devotion to Lolicon, ‘‘Shit posting’, D0xing and harassing celebrities would rather suggest it deserves.

Although 4Chan is comprised of several distinct boards the controversy around 4Chan is primarily due to the /Pol board. This is the 4Chan current affairs and political news area, named /Pol as shorthand for politically incorrect. Content is posted by anonymous members (no registration is needed to post on 4Chan) and usually takes the form of memes and pictures. Many of the memes that have gone viral across the wider internet started life on /Pol, perhaps the most infamous being Pepe the Frog who became widely known as the populist symbol adopted by the far right.

Footage on 4Chan is short lived on the site (no board can exceed the set post limit so old content is deleted as new content is posted) and this high turnover of material undoubtedly contributes to the regularity of its readership.  The aim of those who post on the site is not to preserve their message for posterity on 4Chan but to get their posts adopted into the mainstream and to confuse the media and public alike with lies and conspiracy theories dreamed up in the bedrooms of teenage 4 Channers.

4Chan is a breeding ground for racism, fascism, hate and Donald Trump supporters. In 2015 Trump himself appeared to endorse the site when he retweeted a Pepe meme and then allegedly posted on 4 Chan thanking members for their support. The site went on to further notoriety with the Pizzagate scandal in which 4Chan members sought to smear Democrat candidate Hilary Clinton with false accusations of human trafficking.

The site is currently concerned with ‘QAnon’ a nonsensical conspiracy theory that basically advocates a deep state establishment working secretly against Donald Trump and his party and for which there is no evidence whatsoever. This perhaps more than anything illustrates the purpose and success of 4Chan, the ability to take anonymous lies, spin them into fantasy and feed them to a gullible public (invariably an American audience) in the knowledge that in the modern world of web based technology an interesting lie will spread far faster than a mundane truth.