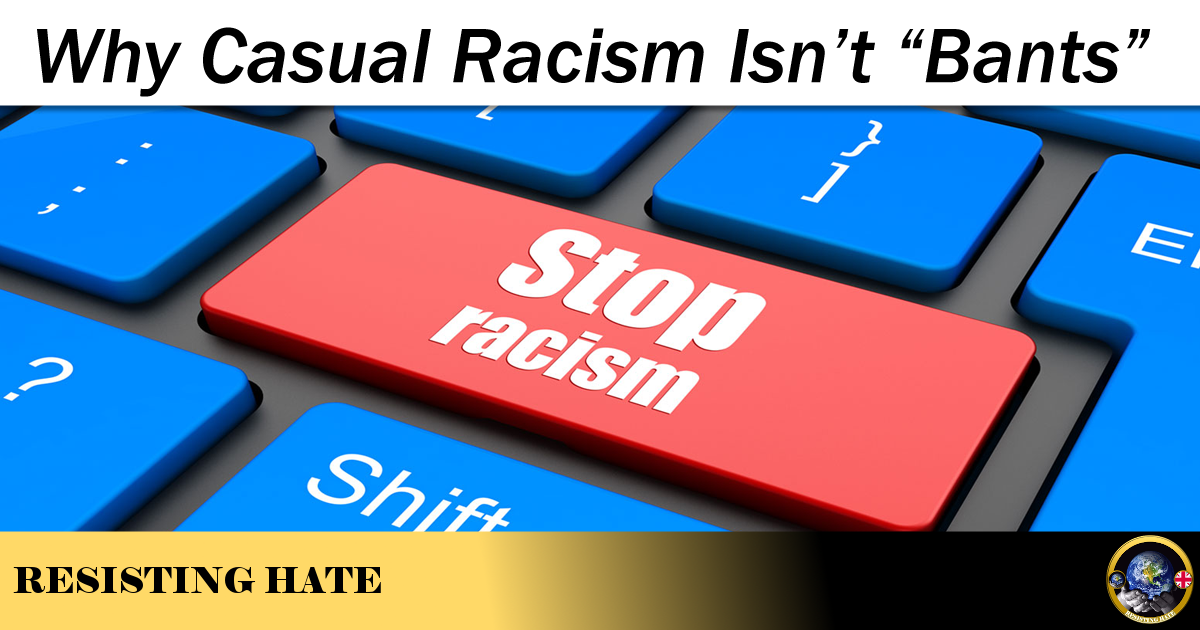 Britain is recognised worldwide for having a unique sense of humour and the ability to laugh in the face of gritty reality. This stood us in good stead through two World Wars and continues to serve the people of the country well through hardship, economic instability and remarkably even a Conservative government. However, no matter how right we are to be proud of being a nation that can stiffen the upper lip and find humour in even the most treacherous of situations we do need to stop on occasion and ask ourselves if some of this humour is actually funny.

I genuinely detest the word “bants”. In my view it has acquired the connotation of being a get out clause for people who want to make statements designed to offend but who lack the back bone to stand by their convictions and express their dubious sentiments directly. All too often I have seen the quick (rather defensive) reaction “It was only bants” when somebody has been pulled up on what is more often than not a deeply intolerant and divisive viewpoint.
I’m not at all sure though that all of these people actually realise they are being offensive. Yes there is probably a number who manipulate the concept of humour to make prejudiced and intolerant comments “safely” but there seems also to be a group who believe racist comments, of a nature that most of us believed died out in the eighties alongside corkscrew perms and the rubix cube, are the acceptable face of humour in the new millennium.

“It’s free speech!” they cry when tackled on it, “Just a joke. It doesn’t do any harm.”

And there, precisely there, is where the problem lies. Racist speech does cause harm.

As individuals our voices are small but as a collective our communities have very powerful voices indeed. Every comment, every opinion, every belief expressed goes toward weaving the tapestry that will become the community and ultimately the world we live in. When you make racist and hateful comments this is your strand of the tapestry, this is what you are weaving into the world. One or two comments may not make a difference but as the tapestry grows that hate becomes stronger, more prominent and much harder to erase by those trying to weave strands of human decency into the picture.

It is also a concern that over time people become inured to any concept, even one as abhorrent as racism, so in order to keep telling the jokes that rely on shock value the boundaries have to keep being pushed back. Every racist comment contributes to the normalisation of discrimination in our communities. Every joke moves the boundaries of what we consider acceptable. The danger of this is that eventually we stop seeing racism as a problem. The line has been both drawn and crossed and what started out as an edgy sense of humour has moved through discrimination in the workplace to violence in the streets.

Perhaps most importantly though is the fact that racism hurts people. Have you ever noticed how all racist jokes involve the invoking of a stereotyped characteristic? These racial stereotypes foster ignorant preconceptions and relegate the object of their joke to no longer being an individual but a caricature, a parody of their own race. Dehumanisation is not a sound basis for humour, it breeds a culture of hate.

I make it a point to challenge racism whenever I see it and the reactions of people when challenged speak volumes about their attitudes toward their own humour. One “friend” was genuinely astonished when pulled up on making a joke about a black man with the response “But nobody here is black….” Ultimately (and tediously predictably) the average racist joke teller inevitably ends up with: “I’m just telling a joke. I’m not a racist.”

One thought on “Why Casual Racism Isn’t “Bants””