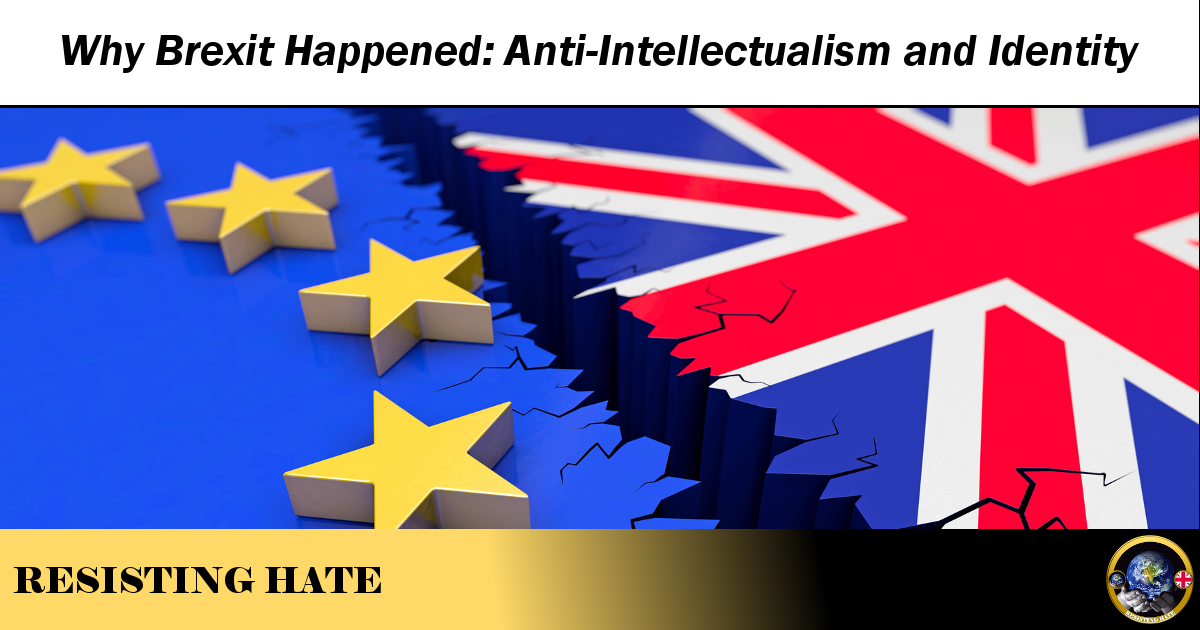 A few days ago I called a taxi to take me home from work. The driver was very friendly and spoke with an accent so, as I am a nerd for different cultures, I asked him where he was from and he told me he came from Turkey. Our conversation eventually shifted to Brexit and him lambasting David Cameron for ‘jumping out of the sinking ship’ which Cameron himself caused to sink. My taxi driver then said something that really got me thinking. He said:

‘It is like us when we entered World War I on the side of the Germans as the Ottoman Empire. They all said that when we won, we’d be going back to the good old days where we were rich and powerful and look what happened – we lost the war and our empire along with it.’

In this short article, I will be saying that two reasons for Brexit in my opinion were Anti-Intellectualism and an identity crisis that has tormented our country since, and due to, the loss of the British Empire that worryingly parallels the situation my taxi driver described to me.

One of the reasons for the Brexit vote that I have identified was the anti-intellectualism that is worryingly present in our country’s political discourse. In the lead up to the referendum in 2016, almost every leading economist, intellectuals and university professors confirmed that, based on the evidence and their professional opinions, it was better for the UK to stay as a member of the EU.

I remember seeing a quite amusing post on Facebook where there were two lists of which people who respectively supported the Leave and Remain in the EU campaigns. On the Remain list were numerous world leaders and experts in various fields. On the Leave side there were only a few names (namely Nigel Farage, Boris Johnson and Donald Trump.) What did we do? We went against the experts.

The Brexit Campaign was characterised to a large extent by anti-intellectualism. The worst thing I saw said across the entire period in this regard was when Michael Gove said “We have had enough of experts”. For some reason, people with no expertise, qualifications or experience in these areas thought they somehow knew better than fully qualified experts who have spent a vast portion of their lives studying that exact topic.

Can experts be wrong? Yes of course they can, they are not superhuman. But given the choice between consulting an individual with a PHD in economics who is teaching at a prestigious university and the average person who doesn’t have this level of expertise or understanding of the various economic complexities of leaving the European Union it is fair to draw the self-evident conclusion over who is more likely to have the most insightful answer.

This is not to say that all leave voters were somehow ‘stupid’ or ‘ignorant’ because that isn’t true and it is nothing but a gross generalisation. But shouldn’t it be obvious to us all that experts are going to know more about their professions than people in other lines of work?  This is the same for virtually any profession in the world, not just in academic contexts. People who devote their lives to a specialism are going to understand it more than a layman.

Of course everyone has the indisputable right to hold an opinion and I would never say otherwise but just because you have that right, that doesn’t mean that your opinion is correct or as well-informed as somebody else’s. If I, as someone with no medical training, told you that in my opinion, you were going to die tomorrow and a doctor who has just completed seven years intense study at medical school told you, based on empirical evidence, that I was wrong, who would you believe?

Your opinion is correct if it is based on facts and evidence that are shown to be correct, not just because you like holding that opinion and want it to be true. The opinions of the various experts on Brexit were all based on facts and informed reasoning. This is why I say Brexit grew from anti-intellectualism because if we had trusted the opinions of experts and evidence, we would have voted Remain.

This is purely just my own hypothesis but it is one that I think has some credence to it. For centuries, Britain was the most powerful country on earth that ruled a global empire on which famously, ‘The sun never set’. That, in short became British identity – The most powerful country at the very height of global prestige. However in the 20th century the British hold on the world began to crack as more and more former colonies gained independence throughout the decades after World War II.

This started an a national identity crisis. We were no longer the most powerful country on earth, we could no longer bend other countries to our will, our position as global superpower had been taken by the United States and later the Soviet Union. We had lost our identity and purpose and we desperately needed to find a new one. Finding our identity as an independent UK became that new identity. We looked to usher in a new age of independence that would allow us to reclaim some of that old fabled pride.

In the Brexit debate the identity crisis was expressed thus: Are we British or European? That was the primary question. In England specifically, it was (and still is) are we English, British or both? Although geographically, we are part of Europe, I think that this issue is in part caused by the fact that we are an island – literally separated from the mainland European continent. Countries on the mainland, France, Germany and Spain for example, all take pride in their individual national identities but also consider themselves European yet we have trouble adopting the mantle of the dual identity.

Brexit was, in my view, a desperate grab at a new UK identity. It was an attempt to try and solve the identity crisis that has plagued us for so long. The country tried to, as the Turkish taxi driver said – go back to the ‘good old days’ where Britain couldn’t be pushed around by other countries and where we held all the power. A lot of older people did vote Brexit, and one of the reasons was almost a desire to return to the golden era of the past, the glorious days of Empire. But, sadly, time travel doesn’t exist and we cannot go back in time to return to the England the older generation knew. As a nation, subconsciously, we are still trying to hold onto our now, non-existent identity as rulers of the world and we just can’t accept that we do not have this status anymore. But understanding our somewhat diminished status on the world stage seems to go against our national consciousness and self-image which is why it is so difficult to dislodge and move on from.

I hope that one day we can regain a sense of identity and purpose as a nation. But leaving the European Union and rejecting our identity as ‘Europeans’ as well as the opinions of experts was not a solution and has only resulted in worsening both the identity crisis and the deep political divisions still present in the UK. We now have to reap the consequences of what we have sown, which is ironically something that we will be forced to face together as one country, unified in the consequences of the mess we have made for ourselves.

2 thoughts on “Why Brexit Happened: Anti-Intellectualism and Identity”