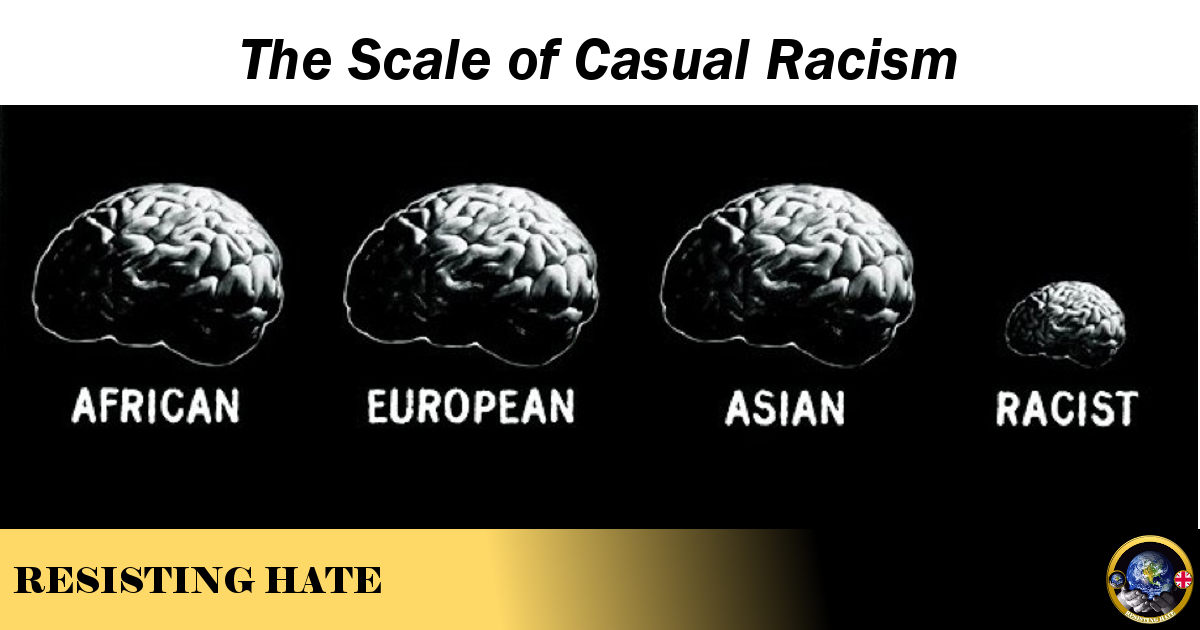 I’m here to fight the extremism, because it’s filthy, hateful and unbelievably evil in a way which I have never quite realised before (becoming involved with Resisting Hate). And yes, it’s immensely dangerous, it risks contagion and am I am totally committed. But thankfully support for far right extremism isn’t huge so we have every chance or of winning or, at worst, containing the disease. But there is something else which is a far greater challenge and potentially much more dangerous.

These latent racists pose the real world threat, because there are simply so many of them. Perhaps 30% of the population, as a minimum? Brexit has empowered many of them, given them license to insult, vilify and hate in the name of so called patriotism (aka nationalism). And there are yet more who lurk beneath the surface of respectability but who still crack the jokes and laugh at the insults down the pub of a Saturday night.

So these guys scare me, not because of their extremism but rather of their scale. They are everywhere, their racism is deep rooted and is being awoken. The Far Right are the detonators, these institutionalised racists are the weapon. Robinson knows this, as does Waters and the rest, as did Hitler. The ingredients are all there, the danger is not just from the Far Right, but from the population itself.

Do I really believe such dystopian thoughts? I mean, of all the European countries with their extreme “popularism”, the UK seems to be the most tolerant, the least racist, the most welcoming. We’ve never tolerated fascism, we have never liked extremism. We have what “appears” to be a fairly moderate Government as well, one which doesn’t tolerate RW extremists. After all, this couldn’t possibly happen in the UK . . .

Yet on the other hand, we are the only EU country to have actually adopted an extreme RW ideology in Brexit, an ideology beloved of every Alt/Far Right group in Europe. We are the model to which the fascists aspire. And, despite appearances, we have a Government who appears to have control of the media narrative, who is pursuing the authoritarian Brexit, and who continually challenges any dissenters from the Lords to the Judiciary and beyond.

So yes, reluctantly, and with incredulity, I accept the realistic probability of a more dystopian future – Brexit has released dark forces which could coalesce into the perfect storm. This is how the extremists take power. But even if the future is not so bleak, we still have the ingrained societal racism which is abhorrent and must be uprooted, no matter how hard it will be and how long it will take. Either way we cannot afford to do nothing.

3 thoughts on “The Scale of Casual Racism”