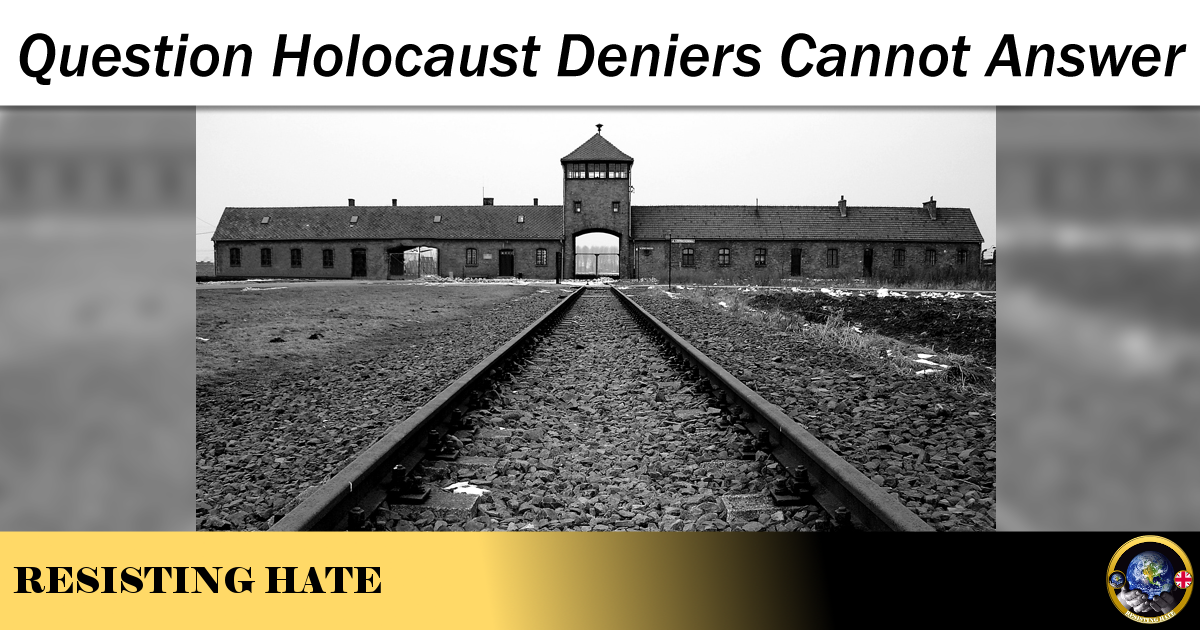 There are many factually proven arguments which entirely eradicate the Holocaust Denial which is perpetuated by self styled “revisionists”. I have provided some good quality links to the discussions at the bottom of this article and urge any interested parties to fully educate themselves with the facts before forming an opinion.

Holocaust Denial takes the form of several key arguments but most notably the denial that the Nazi concentration camps were used for intentional mass genocide. For the purpose of this article this simplified definition is the definition I am using.

The purpose of writing this is to address one key point of discussion that no supporter of Holocaust Denial has ever been able to explain successfully. The question why after the Second World War the Nazis themselves never attempted to deny the Holocaust.

As a starting point l am going to suspend belief and pretend that the Holocaust Deniers are correct and the Holocaust never happened (it did – but bear with me).

Ok so it is 1946. I’m a Nazi. In this alternative reality I have spent the war years running labour camps with the focus of segregating Jewish people and others from mainstream society. I have acted in good faith on the orders that have come down from the German government and my immediate superiors. I have believed that my work in the camps has been for the benefit of my country and my people.

At the end of the war I was captured, tortured into revealing my real identity and incarcerated.

My imprisonment has been an ordeal, I have been beaten and abused by guards. The world’s press are clamouring for my story. I am awaiting trial which will likely end in my execution. I am frightened for my life.

My family are being harassed by the media and vigilantes from the general population. I am frightened for their safety.

My country is disgusted at the actions it believes I have undertaken, namely my alleged involvement with the concentration camps that are believed to have been death camps responsible for the mass slaughter of millions of people.

I am accused of having committed atrocities that few sane human beings could undertake without descending into madness. I am accused of direct involvement in the systematic organised murder of hundreds of thousands of people.

I wait nearly a year for my trial. I wait for the chance to vindicate myself, to refute these allegations, to defend my name to my friends and family.
I wait for the opportunity to defend my country from the lies of the death camps.

I wait to defend humanity itself from the horror of the atrocities of which I am accused.

At the Nuremberg trials I have the chance to speak out. I am asked about Auschwitz, about Madjanek.

I am aware that if I am convicted I will be executed.

I am aware that if people know I am a Nazi guilty of war crimes my family will not be safe.

I am aware denial is my best chance of defence.

Even knowing my confession will lead to my execution I still readily admit my guilt for crimes that never took place.

(I’ll stop suspending belief now. We can go back to the correct factual understanding that the Holocaust is a genuine historical event.)
The story above played out in one form or another every time a Nazi took the stand at Nuremberg. With notably few exceptions (some historians interpret the Nuremberg trial transcripts to say no exceptions) all the Nazis on trial acknowledged the death camps existed.

“Revisionists” cannot explain this. They try to allude to the Nazis on trial being too frightened to speak out. This is plainly implausible. Conviction of war crimes carried a death sentence. If the death camps were a myth the Nazis on trial would have had every reason to deny their existence in an attempt to save their own lives. If the Holocaust was a lie they had nothing to lose by saying that and they had everything to gain by denying it ever happened.

“Revisionists” also make the claim that Nazis lied about the war crimes because they were frightened of the consequences for their families. This too is implausible. A Nazi admitting war crimes placed his family at far greater risk. He would highly likely be executed and therefore be unable to protect his family. A Nazi convicted of war crimes would also leave his family at risk of revenge crimes or vigilante justice. Had the Holocaust been a lie it would have made far more sense for a Nazi who wanted to protect his family to deny the existence of the death camps.

The level of detail across those on trial at Nuremberg was corroborated between accounts. Nobody has ever offered a compelling argument as to why an organised and orchestrated lie as complex as the invention of systematic mass genocide would be offered to the world.

Until Holocaust Deniers can address this question with more convincing arguments than the ones I have debunked above then their position will continue to be untenable and academically worthless.