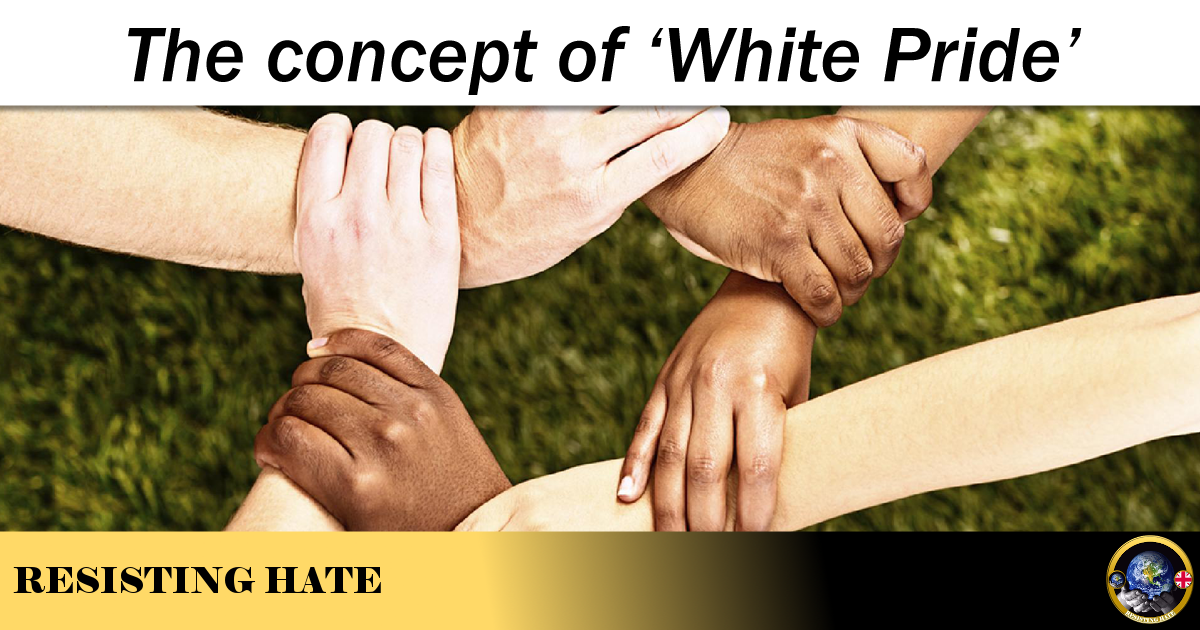 One of the challenges that Resisting Hate encounters more frequently than any other is the perceived concern that minority groups have the right to take pride in their heritage, culture and communities but that other groups do not. This issue has been raised many times with complaints from white, straight (often Christian) individuals stating that when they express pride in their own views and history they are accused of prejudice and racism.

Historically the communities who now enjoy high profile awareness events are the communities who have experienced the highest levels of intolerance and discrimination over the years. Gay Pride London 2017 attracted over a million attendees but it is important to reflect upon that figure in the context that only as recently as fifty years ago being homosexual was a criminal act. Black History Month is celebrated every year to the predictable outcry of “What about White History Month?” but when we remember slavery was only outlawed in Britain in 1833 we realise that the people celebrating today may have had great great grandparents born into black slavery. In the context of the prejudice these groups have endured we start to get a feel for why these events – in recognition of freedom and equality – are so very important.

Events like Pride are a stepping stone from discrimination to equality. When our society has evolved to the extent where homophobia and racism are no longer an issue then it is unlikely community groups will need to celebrate these events. But in a world where people do continue to suffer abuse for being gay, black, Muslim, Jewish etc. then celebrations of these community groups are needed. They are needed because they contribute to the education of the public at large which helps to eliminate prejudice. They are needed because they provide a support network and friendship base for those who do experience discrimination. And they are needed politically as a statement that prejudice is not acceptable in our society.

I do agree that everybody has a right to celebrate their culture and though white people are not a minority group and have not faced the oppression that many others have, it would only act as a catalyst to further prejudice if they were not permitted the same degree of cultural pride that is freely expressed by minority groups.

But pride should be expressed on the same terms. Black History Month is about celebrating culture and heritage. It is about remembering heroes and ancestors and honouring those who fought and worked for the freedom of the oppressed. Gay Pride celebrates the right of individuals to love where they will without fear of sanctions or censure.  These are positive themes that celebrate the very best of humanity. If white people want to celebrate their culture then this should be supported but only if they also do it in a way that also celebrates the best of humanity.

Too often white pride turns into the very prejudice that the minority groups have been subjected to for many years. Instead of celebrating their own culture there is a danger straight white pride can turn into the denigration and abuse of other cultures. “Keep Britain white” and comments of this ilk are not celebrations, they are calls for hate. The gay community does not deride the straight community and the black community honours their own achievements rather than belittling others. It is important that anyone wishing to celebrate their own culture follows these same principles, namely to look for what is good about their own community rather than looking to find fault with others.

The reason that those wanting to celebrate their white English heritage are so often called racist is because they have allowed their cultural symbols to be usurped by those who do have a racist agenda. It is not racist to fly the English flag but, because so many racists do, it has discouraged those with a genuine pride in their country from flying it. White pride has become synonymous with thugs, skinheads, racists, bigots and haters. Many patriots may not fit this description but, because so many do, the stigma has stuck.

We have heard the phrase “Taking our country back” rather a lot over the last two years but this is precisely the advice I would like to offer to white English patriots. You need to take your country back. You need to reclaim it from the prejudiced haters who have linked English pride with racism and hate. You need to reject the bigots who try to use your history and your culture as a stick to beat others with. You need to speak out against hate groups like Britain First or single policy political parties like UKIP who tell you that in order to be proud of who you are, you must resent everybody else.

You need to understand that the thing that makes Britain great is the ability to share a space with other races, faiths and cultures in harmony and that sharing the country with people who think or look differently to you is not about diluting your culture but about taking the strengths of all cultures to build stronger communities.

You need to take your flag back from those who use it as a symbol of white supremacy and who fly it to show threat instead of unity. You need to honour your war dead and remember that they died defending this country from fascism and the racial and religious abuse of others.

If you are so proud of your country then do something to make it a better place.

4 thoughts on “The concept of ‘White Pride’”