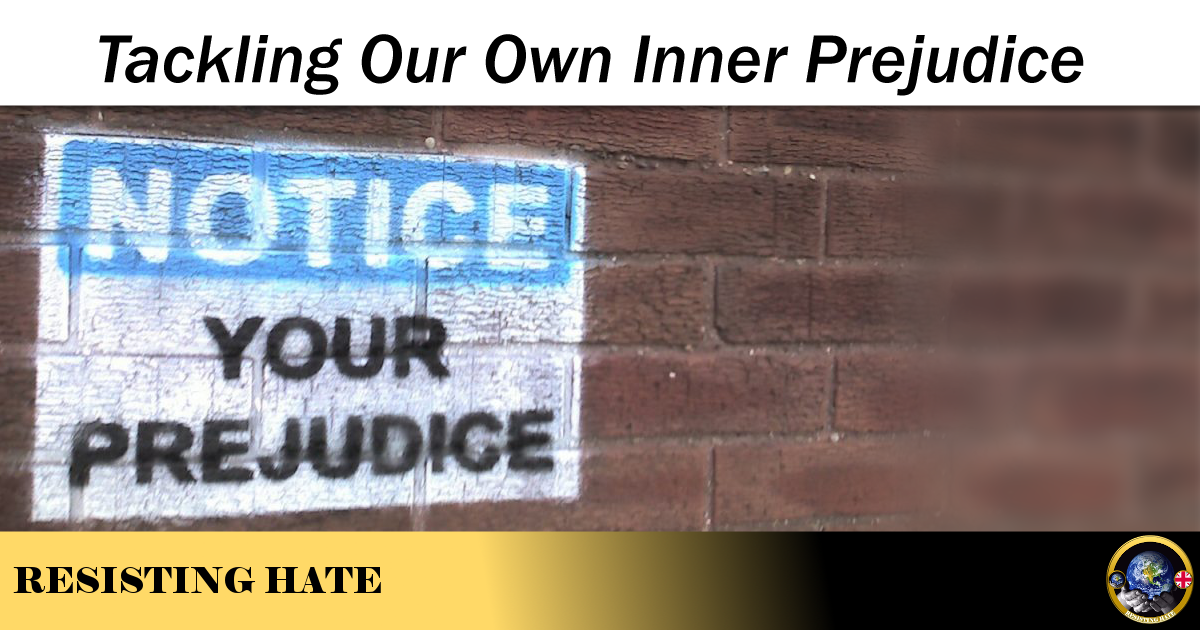 With few exceptions most of us like to believe that we are without prejudice. We like to think that we are blind to colour, race, culture and creed and that we see people as individuals and not as a product of a type.

As a co founder of an anti hate group, who regularly speaks up about tackling prejudice within a wide range of different communities, it is very important to me personally that I remain prejudice free and supportive of other people’s rights to be who they are without being judged. However, I had an experience the other week that made me question my own perception of others and which illustrated to me very clearly that even within the most liberal, open minded, accepting kind of person there can be hidden prejudice lurking beneath the surface.

The event that raised my concerns was fairly nondescript. I was walking along the high street with a friend when they nudged me and pointed at a young chap with the comment that he looked like: “One of those fascists you are always finding on Twitter.”

The gentleman in question was a young white male, shaven head and sporty clothing. There were no obvious clues that might have led to my friend thinking him a fascist – no Nazi insignia, no badges or tattoos that might have given an insight into his personal or political views. Nor did his behaviour suggest he was anything other than a young man walking home from the gym. Yet his appearance was enough for my friend to make an immediate snapshot judgement (and one she felt worth pointing out) that this young man looked like a fascist.

The interesting thing here was the fact that my friend had chosen this particular passer-by to comment on. She would not have dreamed to try and make a racist joke about the young Asian male who had passed us earlier or a homophobic joke about the two lads walking closely together on the opposite side of the road or a body shaming joke about the large lady getting on the bus in front of us.  She would have known I would find those comments deeply offensive so she wouldn’t have made them. Yet she believed it acceptable – and not only acceptable but amusing – to single out this individual as the target of her humour.

But what shocked me more than the comment itself was my own instinctive reaction to it. Before I had chance to process the comment I found myself nodding in agreement. On a deeper level than my conscious mind I had already mentally put this young man on trial and found him guilty. I had done the very thing I fight so hard against, I had judged somebody based solely on their physical appearance.

This is how prejudice gets a foothold in society. If we are unwilling to challenge our own prejudices we have no chance to convince anybody else to fight theirs. It is impossible for me to stand up and tell people not to discriminate against Muslims, Jews, People of Colour etc. if I am guilty of the same prejudiced reaction toward a particular demographic myself.

Fighting prejudice is about looking inward as much as it is outward and it is about tackling our own attitudes. It is about acknowledging when we do make the mistake of stereotyping others and being honest enough to hold our hands up and admit when we are wrong. I was wrong to stereotype that young gentleman. I was wrong to assume (even momentarily) that a shaven head on a young white male gave me the right to believe I had any insight into his views. It was naïve, ignorant and an insult to an innocent individual going about his business in the town.

Anybody can be the victim or instigator of prejudice. If we see any community as fair game for prejudicial humour then we are not just vilifying them but we are vilifying all the other communities as well by singling out one demographic for special treatment. Equality has to mean equality.

Sometimes there is a danger we can be so passionate about eradicating prejudice that it actually leads to us developing prejudices of our own. We fight so hard for the rights of some that we start to develop preconceptions about others whom we wrongly perceive to be aggressors. We saw this in the backlash after Brexit when some of my fellow Remain voters insisted on saying all the Leave voters must be racists and bigots. Such preconceptions achieve nothing but to create divisions in society.

I was lucky enough to learn from my experience and now consciously combat any instinct to make assumptions about people with no evidence to back them up.  I’d like to see other people performing similar introspection and challenging themselves as well. In the work I do with our group Resisting Hate I see so many people with senseless prejudices against Muslims, Jews, People of Colour, Gays, Women etc. It is time to confront those preconceptions and to stop judging communities and groups based on the actions of a handful of individuals.