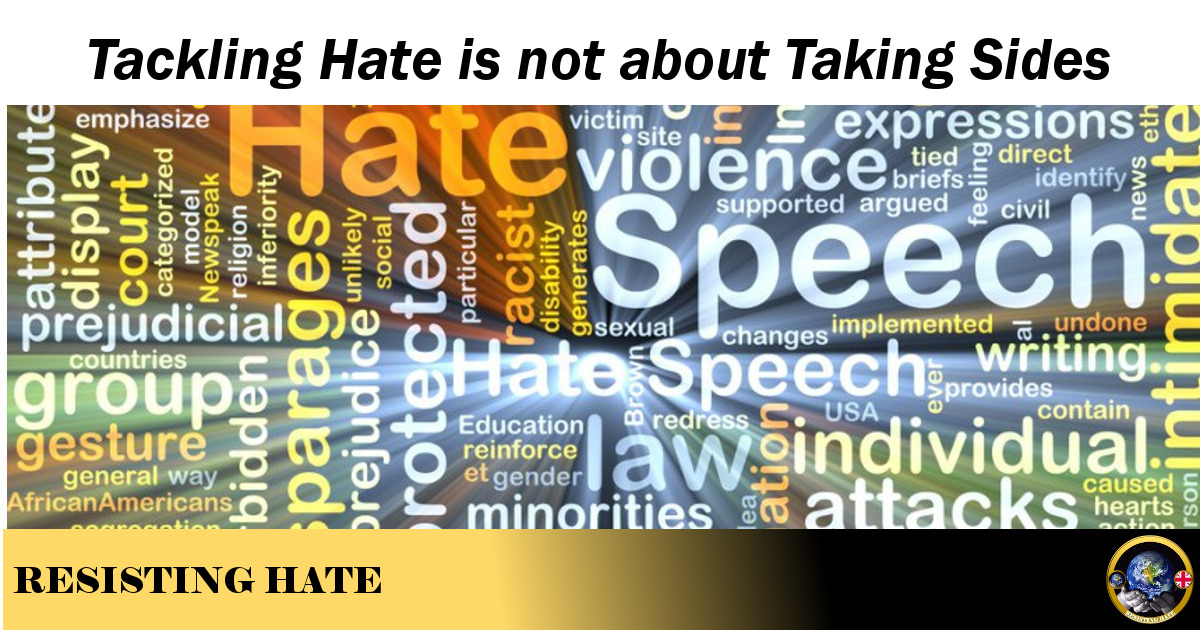 I have seen many anti-hate individuals and organisations trip themselves up by trying to fight for the rights of one group or community at the expense of denigrating another. Few things frustrate me more than the view that fighting hate has to be about taking sides or the implication that defending one group automatically assumes the attacking of another.

Sadly, I have come across many self-proclaimed fighters of hate who stand on their soap box and preach tolerance but who, when it comes down to it, are simply using their support of one culture to fuel hate toward another. This is not what anti-hate is about. You cannot go out into the world and fight hate effectively if you harbour it within your own heart. It is not a victory for tolerance if raised awareness for one community is achieved through prejudice and discrimination toward another.
Standing up against the hate in the world has to be based on the premise that all individuals have something positive to offer our society and that all individuals deserve the same level of respect and the same right to live free from abuse. We may not like or even understand the beliefs of others, we may not wish to adopt their cultural habits, their clothing or their values but it is through accepting their right to be who they are and to live their lives in accordance with their beliefs rather than ours that we establish the bedrock of a free and tolerant society.
We founded our group Resisting Hate on the principle that all humans are of equal worth and value and that in order to stand up for the rights of one we must be prepared to stand up for the rights of the many. This developed our understanding that if, as individuals, we want to be respected for our beliefs, views and cultures, we must in turn respect others for theirs.
This has led to Resisting Hate developing a very diverse online community with multiple faiths, beliefs, races and orientations openly accepted. If we ever did decide to promote one culture at the expense of another we would be acting totally against the integrity of our ethos which is to believe all cultures to be equal.

Our anti-hate community have managed to integrate together our very different beliefs in an environment that allows us all to be true to ourselves without infringing on the rights of one another. We have created a space where we can ask and answer honest questions about our different faiths and where we can debate topical news items without fear of seeming ignorant or prejudiced. This has enabled our members to learn from one another about other cultures which in turn has helped eliminate prejudice and ignorance from our organisation.

What deeply frustrates me is the fact that the wider world is struggling so much to overcome their differences to integrate in the way that our members have demonstrated is so achievable with the right attitude. Our Christians and Atheists are capable of discussion without argument. Our Muslims and Jews can discuss the problems in the Middle East without personal conflict. Our homosexual and heterosexual members respect one another’s sexual orientation without judgement. The unifying factor among all our members is the categorical opposition of all forms of hate and discrimination. Every single member of Resisting Hate believes that the only way they can expect respect and tolerance toward others is to offer it first.

Only last week I saw a self-professed ‘activist’ tackle his objective of fighting Islamophobia by making offensive and inaccurate comments about Jewish communities. I have seen the same mistake made by supporters of Jewish rights against Muslim communities. These tactics are counterproductive. They encourage people to believe that they must take one ‘side’ or another and to see those with differing beliefs as the opposition. For these limited people the world has not progressed very far from the concept of “If you are not with me, you must be against me.” A world in which everybody who thinks differently is the enemy.

There are some excellent organisations who do not approach anti-hate with the aim of division but there are still too many people using the guise of support to oppose, discriminate and condemn those of whom they disapprove.

At Resisting Hate we believe that the only way to achieve peace and unity in the world is to find a way for all races, faiths, cultures and belief systems to integrate and work together. This is not me mouthing platitudes, I have put my money where my mouth is and co-founded an organisation that has achieved exactly this. We have proven that it is possible for people with widely opposing world views to come together and unite under the principle of accepting our differences and co existing in harmony.

If we can do it, so can everybody else.

2 thoughts on “Tackling Hate Is Not About Taking Sides”