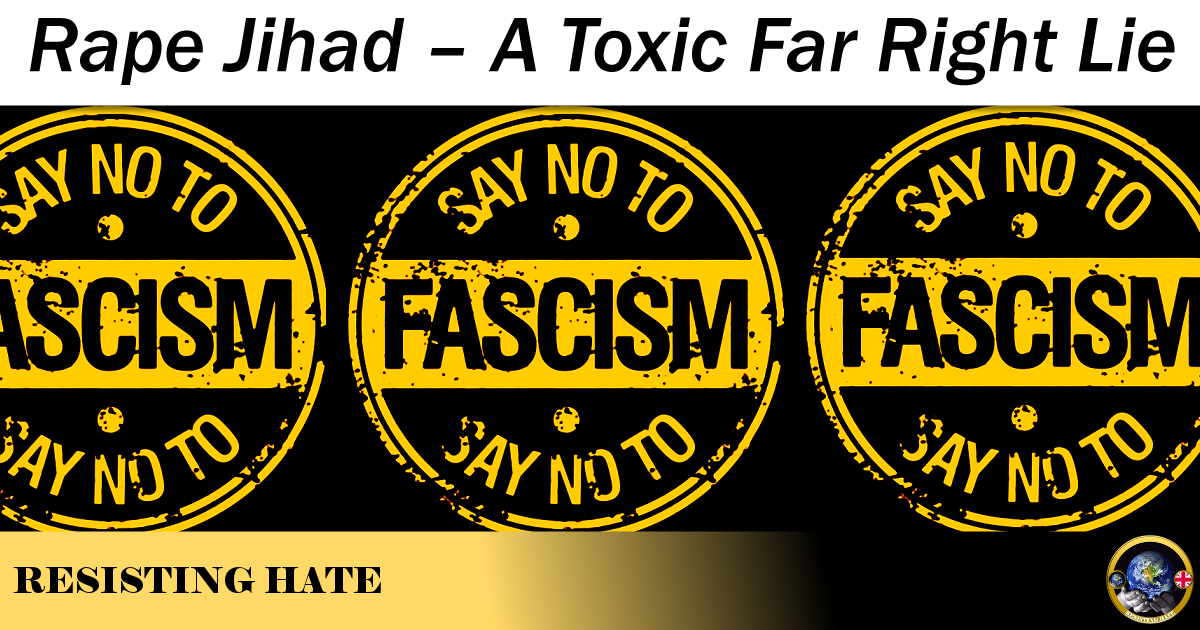 There is an ever-growing amount of toxic Islamophobia nurtured online – racist, xenophobic and anti-Muslim rhetoric readily available to impressionable people from a young age.  Despite fanciful talk, Facebook and Twitter have done mercilessly little to quell the tidal wave of bile that flows willingly from every laptop and Android phone 24/7, Twitter having no qualms awarding blue ticks to Hitler worshippers, Holocaust deniers, violent white supremacists, professional bigots, and the KKK.  Organised intolerance is a pervasive fascist cancer that spreads like wildfire throughout society via electronic hubs of lies and disinformation with far right defamation of Muslims uncensored under the premise of “upholding free speech” and most high profile hate accounts remaining online despite thousands of filed reports.

“Rape Jihad” is deceptive terminology coined by Pamela Geller and her anti-Muslim cohorts to erroneously imply the Qu’ran encourages worshippers to rape and molest kids.

The Muslim holy book does not condone sexual assault against anyone of any age, no matter what Tommy Robinson’s ghostwriters falsely claim.

Not just Islam, but none of the world’s main religions justify rape or sexual abuse.  Whilst religious conservatives of any denomination tend to oppose individual freedoms, and in many cases, gender and sexual equality, there is nothing in age-old scripted religious documents which supports the use of violence, sexual or otherwise, towards women or children.

The malicious lie that Islam in any way encourages or justifies child abuse, is absolutely abhorrent, and is symptomatic of a post-fact news era where grossly made-up stories become true if shared and retweeted enough, mirroring the deadly schematics of Joseph Goebbels for a technological age.

The mere idea that CSE (Child Sexual Exploitation) was a form of Islamic terrorism, is total and absolute nonsense but the participants of far-right-linked marches against terror always, and without fail, include speeches about Rotherham and child rape. The football hooligan-based FLA included.

The thousands of young, female victims in Rotherham, the South Yorkshire town, which has become a site of annual pilgrimage for the far right, were not victims of any act of terrorism or political extremism of any sort, although a small number of the victims did report instances of racial comments being made.  They were abused by filthy sadistic perverts who seized the opportunity to target young girls under the radar, as paedophiles do.  Opportunistic, conniving, controlling, sordid and pure evil as the offenders were, not one of them used their faith background as jusification for their paedophilia.  No-one charged with these horrific offences told the courtroom “Allah made us do it“, or “It was written in the Qu’ran“, which, if it had been the case, would have been used to plead diminished responsibility via religious brainwashing, to lessen their sentence.  Ready excuses to get an easier ride through the courts for convicted criminals are more often than not seizedupon at the first available opportunity with shrewd lawyers onhand to inform defendants of every possible mitigating circumstance.

Religion was most definitely not a motivating factor in these horrific crimes against young girls, and to pretend as much deprives the victims of truth and hinders the healing process of such devastating crimes.

ISIS, Al Qaeda nor any other Islamic extremist group was operating in Rotherham, Rochdale, Keighley, or other town implicated in recent grooming trials where children were abused.  The victims were peddled haram substances such as drink and drugs, and exposed to pornography, which is unreligious as you can get, by any measure. Islamic extremism, as a fringe quasi-religious movement is an abhorrent dogma which contorts scripture to self-justify killing, mass-murder, and warfare in the minds of the radicalised, but though deadly beyond belief, nowhere in their twisted view of Qu’ranic dogma is self-gratification via sexual abuse.

Women were used as a commodity in “caliphates” in Iraq and Syria, and in some instances were raped or abused within the ISIS terrorities, but their twisted religious interpretations saw “ISIS brides” as a means of procreation to maintain sect numbers, in a similar way to the pregancies of the girls abducted by Boko Haram in Nigeria, a tactic based not around sexual gratification (although abusers undeniably enjoy abusing), but rather a forced childbearing strategy, or “biological jihad” of sorts.

Whilst white supremacist conspiracy theorists falsely claim that “invaders” (i.e. refugees) are arriving in Europe’s shores to “impregnate” white mothers with brown babies, in truth, not one of the grooming cases which the Islamophobic far right constantly drool over, was conducted as a means of carrying-out a mythical so-called “white genocide”.

The very same “alt right” voices are ironically happy in the knowledge that Donald Trump grabbed women by their private parts and has himself been accused of abusing children by several different accusers.

Most offenders from these well publicised grooming trials were UK citizens and not recent arrivals or refugees.  Although many were discovered to be from an Asian-Muslim background (practising or otherwise), there is no evidence whatsoever of any religious motive for such crimes, and constantly, UK imams have spoken out against child sexual abuse once it came to light that members of their own communities have taken part in such evil actions, criminal acts which contravene the tenets of Islam.

Victims of opportunist abuse by groups of abusers in metropolitan towns and cities throughout the UK in were not groomed to forcibly produce babies to prolong a caliphate, but were purely and simply used for sex (outside of marriage), something no interpretations of Islam (however extreme) condone.  Anybody using the false pretence of “rape jihad” to describe the criminal actions of lawless paedophiles in places such as Rotherham is messing with the truth.

Nobody accuses Catholicism of being complicit in child abuse, even though, as with unchecked take away workers and taxi drivers, a significant number of paedophiles used the Catholic priesthood to get close to young children in a similar fashion, knowing they would be likely to escape detection.

Anti-Muslim propagandists such as Stephen Yaxley Lennon AKA Tommy Robinson, constantly use the false term “RAPE JIHAD” to label CSE as “Islamic”, knowing full well that terrorist outrages in cities such as London and Manchester provoke gut reactions which bypass logic and truth, and allow untruths, however deceitful, to stick.

Rapes in European countries such as Germany and Sweden carried out by refugees from a Middle-Eastern background are not acting on behalf of the religion of Islam either. If indeed they are the actions of practising Muslims, the so-called “rape epidemics” in these countries have been blown out of all proportion by extreme rightwing media organisations such as Breitbart, Infowars and Prison Planet with numbers exaggerated, dubious cases highlighed, and truths falsified to fit an anti-Muslim agenda. All this whilst also failing to mention that white offenders in these particular countries vastly outnumber sex-crimes committed by recent arrivals.

Dwelling in President Donald Trump’s post truth-era, it no longer matters whether news is real or not, the only consequential truth that permanently impacts upon social media are soundbites and online rumour mongering tactics utilised by both Cambridge Analytica and Russian troll farms to great success to drive public consciousness ever-rightwards during election campaigns.  Through stop-gap propagandist exercises including Trump’s Muslim ban, and the Russian financers supporting  anti-European far right parties (not forgetting Brexit) the world has become a far more insular and dangerous place where not just subtle neo-fascism, but outright neo-Nazism have made an unwelcome return. Far right militants in first-world cities are now no longer afraid to make Hitler salutes or wave the once socially unacceptable swastikas.

The moment Western society allows itself to accept falsities such as “rape jihad” as truth, is the moment history has well and truly repeated itself.  Mein Kampf deliberately portrayed the people of one particular faith (Judaism) as a complete threat to Western civilisation and now, in the age of fake news, haters have switched towards demonising Islam and Muslims in every possible way, hoping to achieve similar genocidal aims.  Check any post by the former EDL leader “Tommy Robinson” and you will come across numerous incitements to the genocide, murder, and rape of Muslims. Robinson’s Adidas-jackbooted thug supporters make equally abhorrent and uncensored comments which parallel the concocted outrage by Germany’s national socialists under the reign of Adolf Hitler.

A violent criminal who assumed the name of a dead Luton football hooligan, Stephen Yaxley Lennon, is stage-managed by a team of ghostwriters and anti-Islam sugardaddies to rabble-rouse against any crimes committed by non-white people suspected of being from a Muslim background. Adolf Hitler was quick to round-up non-practising Jewish people in concentration and death camps. Their crime? Belonging to the Jewish culture. In a ghoulish echo of history Tommy (and Britain First) label together religious and non-religious Muslims as “cultural Islam”, swift to view everybody with a brown skin and a Muslim-sounding name as the purveyors of a deadly jihad, however untrue this is.

The next time you notice a far right extremist using the lie of “rape jihad”, don’t hesitate to put them right.  Let them know they have been indoctrinated with pernicious lies in parallel with the followers of ISIS themselves.  Pretending non-white British paedophiles acted on religious instruction is, not only grossly untrue, it lets down the victims of such horrendous crimes by deflecting from the actual actions of criminal perverts who acted on behalf of nothing other than their own sick gratification.

One of Britain’s most deadly paedophile rings operated in Blackpool.  This was a white child abuse gang consisting of BNP officials and supporters linked to the disappearance of Charlene Downes, with two people convicted of the murder of another young teenager Paige Chivers.

Take a look at the www.edlcriminals.com website to discover how many members of far right organisations have themselves been charged and jailed for child sex offences, many of whom having taken part in marches against so-called “Muslim groomers”.

Far-right demagogues care not one iota for the victims, only focusing on one particular background or appearance of offender.  When a Bristol-based gang of paedophiles from a white Christian background raped babies, yes, babies, and were jailed, a couple of years ago, there was not a single voice of protest by either the EDL or Tommy Robinson, even though this was the most unimaginably horrific of organised child sex abuse crimes.

As I write, the genocide against the Rohingya people in Myanmar is continuing, with numerous reports of women and children being slaughtered, and once again, babies being raped by non-Muslims. Yet, cold, calculated, displaying not-one ounce of humanity, Tommy Robinson has the audacity to pretend the victims of the genocide and child rape are themselves terrorists. This just goes to show the grossly hypocritical mindset of far right extremists.

Hatred is wrong. Hatred is based upon lies, generalisations and false pretences. Hatred scapegoats, stigmatises, persecutes, and destroys the lives of the innocent, while interfering with justice and healing of victims of crimes such as CSE.

Think before you lump everything wrong in the world together as “a Muslim problem”..

Be yourself, and stop judging people by the religion they follow, or the colour of their skin.

95% of British Muslims are non-white.  The vast majority are peaceful and law-abiding.

One thought on “Rape Jihad – A Toxic Far Right Lie”