Pat Condell is a comedian who discovered that there was more money to be made in ranting about Muslims than there was in being funny. He has built up a high profile with a far right social media audience and currently boasts over 341,000 subscribers to his You Tube channel.

Condell is an outspoken atheist and it is his atheism that guided his path from comedy and into social commentary. But instead of focusing on his objections to all religion, Condell became fixated with one religion in particular and his Twitter feed clearly demonstrates he sees his primary role now as a spokesman against Islam.

Utter horseshit. The only reason we have “cultural and religious tensions” in the UK is because Islam is here, and Islam is a far-right doctrine of hate. Anyone who chooses to walk around in a burka is mentally ill and should seek treatment. https://t.co/CnvSpHAYKL

Allow me to clarify my comments. Islam is a sadistic hysterical “religion”, a mental disease, and a curse on humanity. It poisons everything it touches, and its supremacist caterwauling has no place in western civilisation. https://t.co/Y7GbYp5907

Ha ha. The ridiculous hard left hate group #HopeNotHate have listed me as some kind of extremist, yet there’s nothing in this summary to be ashamed of. The fact is Europe is being invaded, and there is an epidemic of Muslim rape, and everybody knows it.https://t.co/yXF5Kaa8aX

Here we go again. The mythical backlash against Muslims. It won’t happen of course, but the @guardian would love it if it did. As for “hate crime”, Islam is a hate crime against civilisation. Its values are ugly and barbaric. It has no place in the UK.https://t.co/qLAhG34dRt

In 2014 the Islamophobic Tory candidate was forced to resign after anti Islam posts were found on his social media. Among the offensive posts were links to Pat Condell’s Islam hate videos.

Condell also has an account on the censorship free site Gab.com. Here, with the confidence that his hate will not cause his account to be suspended, Condell shows us clearly what kind of person he is. 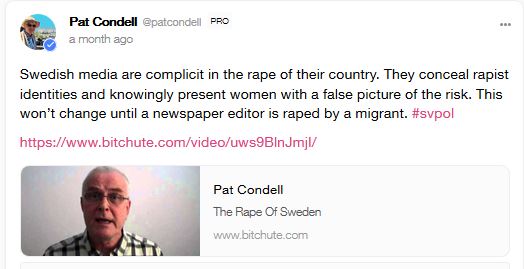