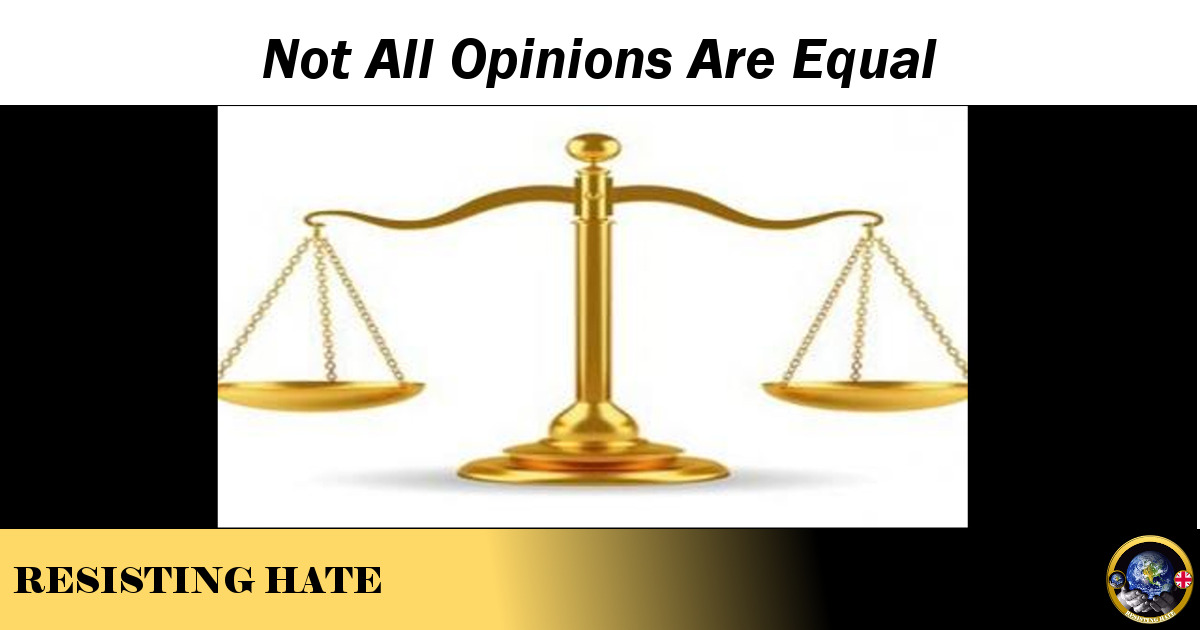 “All opinions are not equal. Some are a very great deal more robust, sophisticated and well supported in logic and argument than others.” – Douglas Adams

2016 and 2017 brought with them a shift in attitudes toward the concept of ‘expertise’ on both sides of the Atlantic. In Britain, Justice Secretary Michael Gove (defending Brexit) publicly announced that ‘people in this country have had enough of experts.’ In America, President Trump dismissed the almost unanimous scientific view of global warming in favour of tweeting his own unscientific views to his Twitter audience.

Increasingly, when the viewpoints of experts are challenged the position is being taken that all people are entitled to have an opinion and that those opinions are equally worthy.

This is only half right. Yes, if we wish to avoid Orwell’s thought crime dystopia, we do not want to enter the murky waters of telling people what they may and may not think, for therein lies fascism. But we must not confuse a person’s right to have an opinion with the worth of that opinion itself.

If I am unwell I go to a doctor and seek his/her opinion on my health. You are welcome to venture an opinion as to why my left ear appears to have stopped working but I am only going to be interested in what you have to say if you have the appropriate qualifications in medicine. The worth of an opinion depends at least in part on the person holding that opinion. The worth of an opinion from somebody with knowledge in an area is greater than the opinion of someone with ignorance in the area.

“Anti-intellectualism has been a constant thread winding its way through our political and cultural life, nurtured by the false notion that democracy means that ‘my ignorance is just as good as your knowledge.’’” – Isaac Asimov

The idea of anti-intellectualism has been nurtured by the right wing press to encourage those who identify as the working class to reject those whom they perceive as elitist. Nigel Farage captured this mood perfectly with his Leave campaign for Brexit.  But any argument proposing that education is a privilege is anachronistic. In the modern age of information any one of us has the power to become informed and aware. Farage tried to make a value out of ignorance but missed the point that he was insulting the very working class people he claimed to represent. Ignorance is not about income, class or social status. Being informed is not about the school you went to or whether you have a degree. Ignorance is a choice. If you choose to be ignorant then you cannot expect that ignorance to be held in the same esteem as somebody else’s knowledge.

“Everyone is entitled to his own opinion, but not his own facts.” – Daniel Patrick Moynihan

Some opinions are based on objective facts. I believe the earth is spherical because all the evidence I have on which to base this opinion points to the fact that the earth is spherical. Some people choose to believe the earth is flat. That’s fine. But believing it does not give that opinion validity. You have the right to believe whatever you choose but that does not mean your opinion is of the same worth as the one based on empirical evidence and scientific study. Popular celebrities often get this one wrong and muddy the waters. I recently came across a quotation widely attributed to actor Brad Pitt stating: “There’s no right, there’s no wrong. There’s only popular opinion.” This, frankly, is balderdash. There are verifiable facts. If you choose not to believe in them, you are wrong. Yes you have the right to be wrong but, frankly, if you choose to disbelieve proven facts you are going to end up looking a bit of a prat.

Some opinions are based on facts that have not yet been verified as true or false. Religion is an excellent example of this. There is a God or there isn’t. But we don’t know beyond all doubt which of these two states is the case. And until we do know then we cannot say that either the opinion of an atheist or of a person of faith is any more or less valid than the other.

I am becoming increasingly tired of hearing that the views of people who have made no effort to inform themselves are worth listening to. Politically this viewpoint has become nothing but a sop to those who cannot be bothered to get off their sofas and educate themselves. It is an implied responsibility of airing an opinion that you make it an informed one. If you are not willing to do this then it is not undemocratic for others to discount the views you bring to the table.

“Ignorance is the world’s most curable affliction.” Jeri Smith-Ready

We are in danger of becoming a society where we are incapable of differentiating between the ignorant and the informed. When we deride our experts and give ignorance a pedestal we turn our backs on all the progress we have made as humans. We must not let our very worthy desire not to offend people blind us to the fact that some people do know more than others, some people are more informed than others, some have worked harder to obtain more knowledge than others and, when it comes down to it, some people and some opinions are worth listening to more than others.

One thought on “Not All Opinions Are Equal”