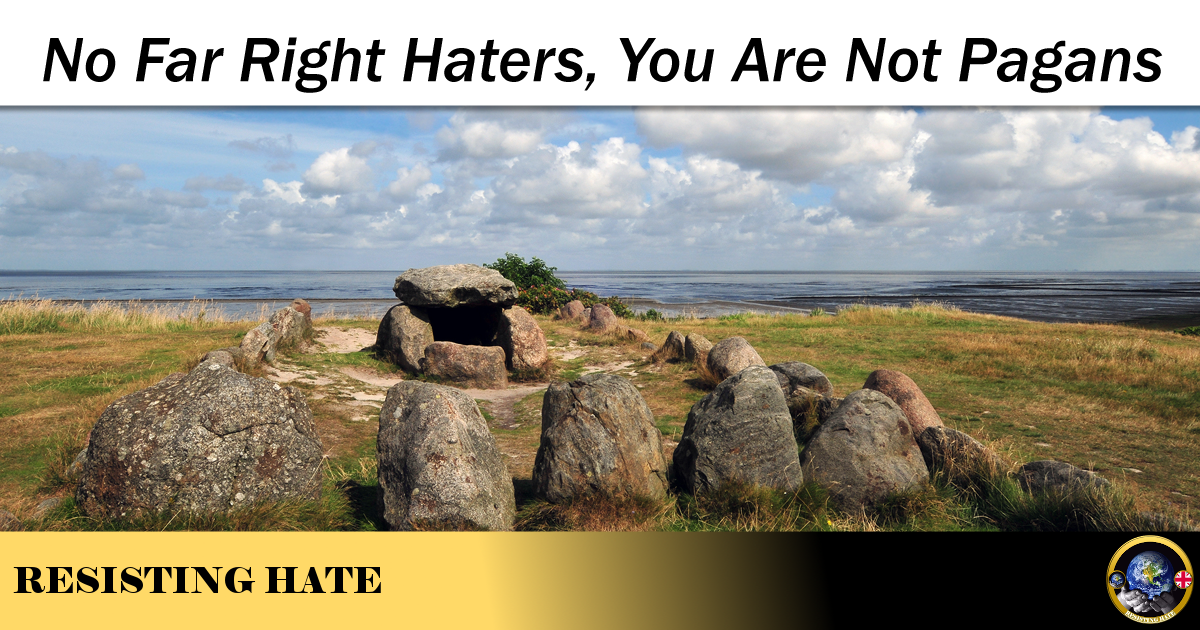 Ever since I had the misfortune of seeing Jack Renshaw, the leader of proscribed hate group National Action, wishing one of his white supremacist members a merry Yule I have become increasingly uncomfortable with the links various far right haters have been attempting to make with Paganism.

In much the same way that Britain First have tried to co-opt Christian values and ISIS have tried to usurp Islamic values I am starting to see my own faith become associated with a misrepresentative and unwelcome element and one that I worry will cause the same confusion and controversy for Pagans that the idiots in Britain First and ISIS have done for the Abrahamic faiths.

To some extent it is easier to co-opt Paganism than it is Islam, Judaism or Christianity. We have no single scripture or doctrine that spells out what it is to be a Pagan or what our beliefs entail. The holy scriptures of the three Abrahamic faiths clearly detail what being a Christian, a Jew or a Muslim involves. Pagans enjoy no such clarity, to be a Pagan can mean something very different to every individual who identifies under the umbrella term of Paganism. This makes it hard to deny somebody as a part of the faith as there is no objective set of rules we can point to as being broken.

The far right have a definite need to identify with a faith. This is because a good deal of their prejudice is targeted at those with differing religious beliefs. Historically they have attempted to align themselves with Christianity in order to fuel their prejudice against Muslims and Jews but as the tactics the far right deploy in their persecution of UK minority faiths move further and further from the teachings of Jesus Christ they have increasingly started to usurp the Pagan faith as an alternative.

The fluidity of Paganism is one of the elements that attracts the far right. As a non-prescriptive faith there are no hurdles to overcome to self-identify as a Pagan. There are no mandatory rites of passage, no set holy days, no learning or memorising of scripture. There is no formal initiation into Paganism. It is therefore perceived by some as a faith that requires minimum effort to adopt.

The far right are attracted to Paganism as they perceive it in some way as being the traditional faith of the ‘English’ people. A faith that predates Christianity, Islam and Judaism appeals to their obsession with Nationalism and their white heritage. It is interesting to note however how inconsistent they are with this as those of the far right who do try to adopt Paganism focus very much on the Nordic Gods and Nordic mythology of the Vikings who, rather ironically, would have been the “invaders” and not the indigenous settlers of the British Isles.

On a base level the far right are drawn to Paganism for the Hollywood associations with the Occult and spiritual power.  Our ranting far right keyboard warriors enjoy the delusion of power that claiming to be Pagan gives them. Undoubtedly it boosts their false sense of self-esteem while tweeting hate speech to their 100 Twitter followers from their Mum’s spare room in their Superman pyjamas.

The modern definition of what it is to be a Pagan is very different to how pre Christians would have worshipped their Gods. When the far right talk about Paganism they are attempting to identify with the Pagans of old as justification for the use of using primitive tactics to destroy cultures that differ to their own. But this is too simplistic as it negates many hundreds of years of human growth and development. Just as we no longer do our cooking in holes in the ground we no longer see and perceive the world in the same way that our ancestors did. When the far right talk about the conflicts between pre Christian communities and how those conflicts were settled with violence they fail to understand that we have evolved as a society since then. Pagans in the modern world do not see violence and prejudice as constructive tools.

Interestingly, the belief that pre Abrahamic societies and in particular the far right’s beloved Vikings were all about violence is a myth. The Vikings were pragmatic and practical people who would usually attempt a trading relationship with other countries before involving themselves in any conflict. If the far right truly want to emulate the Vikings they would do better to involve themselves in matters of farming and trade than they would in violence and disunity.

I have said Paganism is a diverse and hard to define faith in modern times and this is true. Perhaps the one thing though that all Pagans would identify with is a reverence for nature. Nature is an all-encompassing term to mean both the planet and the living creatures on it. This includes fellow human beings. It is not in keeping with the spirit of Paganism to wage war and genocide against other humans. Hate has no place in a Pagan world view.

There is sometimes a misconception that Paganism lacks the morality of the Abrahamic faiths and that as such it offers more wiggle room for those wishing to speak hate against their enemies. Although there is no specific doctrine of morality, the values by which Pagans choose to live their lives are closely associated with liberalism and with the ideas of equality and social justice. This belief system is far more in keeping with a left wing political view than it would be the right wing and certainly has very little in common with the divisive beliefs of the extremist far right.

In summary, the ethos of Paganism is a poor choice of faith for those hell bent on disparaging and discriminating against their fellow human beings. Preach your hate if you must far right extremists – but you do not preach your hate in the name of my Gods.

One thought on “No Far Right Haters, You Are Not Pagans”