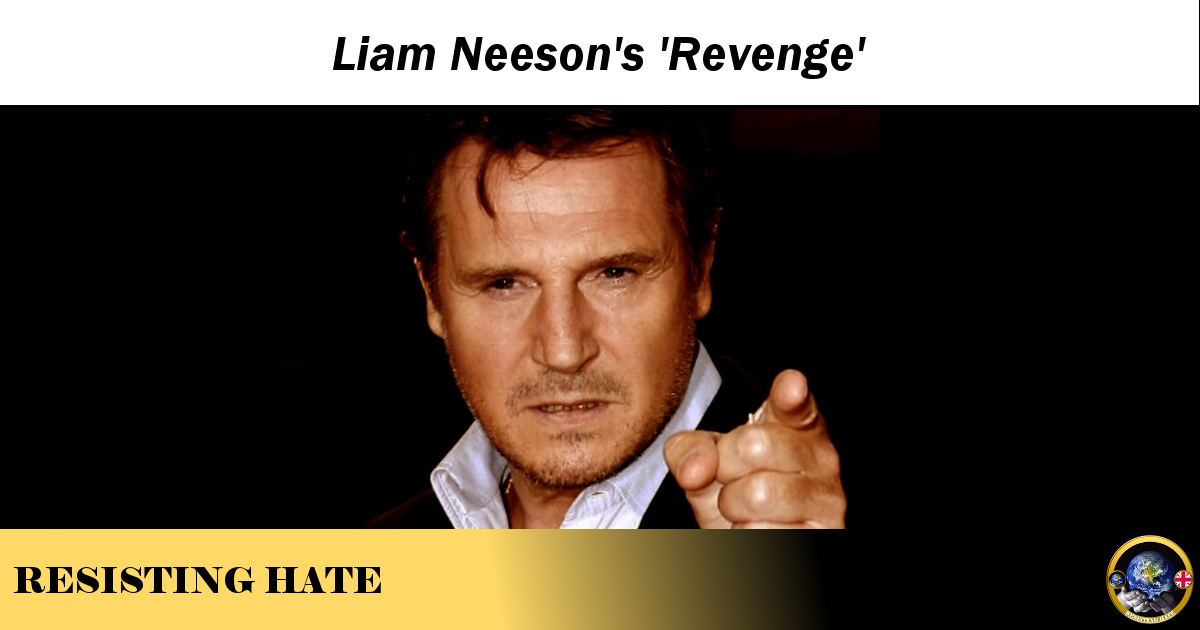 Award-winning actor Liam Neeson who rose to fame through Stephen Spielberg’s momentous Holocaust movie Schindler’s List revealed a dark secret to the media this week. A revelation which shocked his fans and sent shockwaves across Hollywood and social media.

During an interview plugging his forthcoming movie, Cold Pursuit, in which he plays a man avenging the murder of his son, Neeson suddenly admitted to an incident in his past where he had stalked the streets with a deadly weapon looking to murder a random black man in a revenge attack for the rape of a friend of his. Neeson was clear he had not been looking for the perpetrator but for a random black man (on account of the fact that the rapist had been a member of the African-Caribbean community).

The seemingly detached manner in which Neeson recalled his desire to kill a random black man (who he appallingly referred to as “some black bastard” was very unsettling, as was his attempt to link his actual plotted racist murder motivated by hate, with a fictional movie based around genuine revenge.

Whilst a genuine attempt to seek forgiveness for one’s crimes, however undetected or unpunished, is honourable, the ease with which Neeson brushed away his actions in a promo interview was alarming, leading many people on social media to question the purpose of the confession if not his sincerity.

Born in Ballymena to a Roman Catholic family in a majority Protestant Unionist area, Neeson witnessed the Troubles at their most deadly, and having previously documented his closeness to Republican hunger strikers, would have known fully what life was like as a discriminated against minority. Yet his admittance of potentially deadly racial hatred flies in the face of any shared minority experience growing up as one of only a small handful of Catholics in his home town. In interviews, he admitted “It wasn’t easy living in Northern Ireland in the Fifties and Sixties“, and that he grew up ‘cautious’. At university when the Troubles started, Neeson recalled the dangers of drinking the bars he visited as a student: -“Drive-by shootings, bombs. I was at university for one abortive year and we were so f****** naive,” he told Time Magazine. “You’d be in a bar, drinking a glass of cider, and suddenly soldiers would come in and say: ‘Everybody out – there’s a bomb scare’. We’d order more drinks to take across the street, then the soldiers would go off and we’d filter back into the bar. F****** stupid.”

The actor who starred in the leading role in Michael Collins admitted he grew up naive of sectarian hatred – “Our town was essentially Protestant, but there were a few Catholics on our street. The Protestants all had marches and bands and stuff. I didn’t quite understand what it was about.” Whilst ignorance can be a reason, if not an excuse, for an ordinary, working class man to believe the indoctrination of populist newspapers and far-right bigots, just why Liam Neeson waited until an interview about a revenge-themed movie to reveal all, only he knows.

From poolside parties buzzing with paparazzi, through lavish red carpet awards ceremonies, to celebrity engagements and divorces played out on the cover of fashionable magazines, nothing is genuine and sincere about Hollywood or the creatures that inhabit it. To expect heartrending outpourings of remorse from a Hollywood star is most definitely asking too much, however Liam Neeson’s easy dismissal of such a horrific, potentially murderous racist episode in his life as something just ‘kind-of wrong,’ suggests an absence not just of just responsibility, but meaningful remorse. Having built-up a rock-solid reputation for first-rate performances on celluloid in some of the most socially-aware tearjerkers made for the large screen and with a raft of shiny academy awards to his name, his reputation has been destroyed in one badly misjudged confession.

Whatever the reason behind Liam Neeson’s confession, it was not well received by the BAME communities, many of whom are still living life today in an environment of discrimination. Whilst racism was undoubtedly worse in the 1960s than it is in the present day, the post EU referendum rise of the far right is a dangerous place to be seen to endorse racial hostility. This is doubly problematic when it is a respected and influential public figure like Neeson.

Enoch Powell may be long dead, and the notices on windows of bed and breakfasts proclaiming “no blacks, no dogs and no Irish,’ long gone but the problems of racial segregation linger on in our society today. In describing his murderous racist rage as “something primal when you get angry“, Neeson not only fails to address the personal reasons for his momentarily evil nature, he effectively legitimises “revenge” crimes carried out on innocent citizens as “payback” for the criminal actions of totally unrelated individuals.

Fascism is not just alive and kicking in this age of Brexit and Trump, it is enjoying a renaissance, boosted by social media hatemongers who conveniently switched focus from old-fashioned skin colour racism to post-Millennial Identitarianism which seeks to stigmatise and dehumanise an entire world religion and its mainly non-white adherents (the overwhelming majority of whom are peaceful, law-abiding citizens.)  Liam Neeson’s downplayed confession of his murderous racist intent normalises the abnormality of deadly hate crimes with a chilling ambivalence that massages the consciences of every single member of National Action or the KKK.

If a man like Neeson can get away with behaving like a racist thug then it becomes acceptable behaviour. Equating a racist urge fired up by anger with a genuine desire for revenge, is most troubling for critics from minority backgrounds. The white supremacist terrorist who drove his car into the Finsbury Park mosque, acted in the same spirit of so-called “revenge” as Neeson, when he (Darren Osbourne) mowed down an innocent Muslim worshipper for the spurious reason that he was the same faith as the Manchester MEN Arena bombers. If you assault or kill anybody other than the actual assailant who carried out a particular crime, this is not revenge, it is fascistic supremacism, the acting out of a longed for desire to cause harm to someone different to yourself. One black man or woman is not the same as another black man or woman, despite the lies National Socialist eugenicists tell on Twitter and Facebook. Colonialist anthropologists wanted to believe anybody not white or Christian was a “savage”, and through the right wing media, social media trolling and YouTube hatemongering, this discredited pseudoscience is once again flourishing and finding a gullible audience.

If Neeson had followed through with his plans and murdered an African-Caribbean man, that act of racist murder would have had absolutely nothing to do with the violent rape of his friend, any more than the Finsbury Park terrorist ‘revenge murder’ was revenge for ISIS. Neeson cannot blame his motivation upon anger, knowing full well if the rapist had been white, he would not have stalked the streets angrily hunting down white people to murder. Be it Enoch Powell, his friends or family, or racist right wing newspapers, somebody had implanted in Neeson’s mind the evil notion that black people were not human like himself.

Whether or not the confession was a genuine act of recompense, Neeson’s shallow words cause more problems than they do solutions. If he was truly sorry for his heinous actions he should have sought to make real amends by dedicating wealth and resources to victim support groups and survivors of racist attacks. When going public, Neeson should have humbly sought forgiveness from mankind, rather than indulging in an ambivalent spring clean of a guilty conscience which has generated more fear than it has hope.