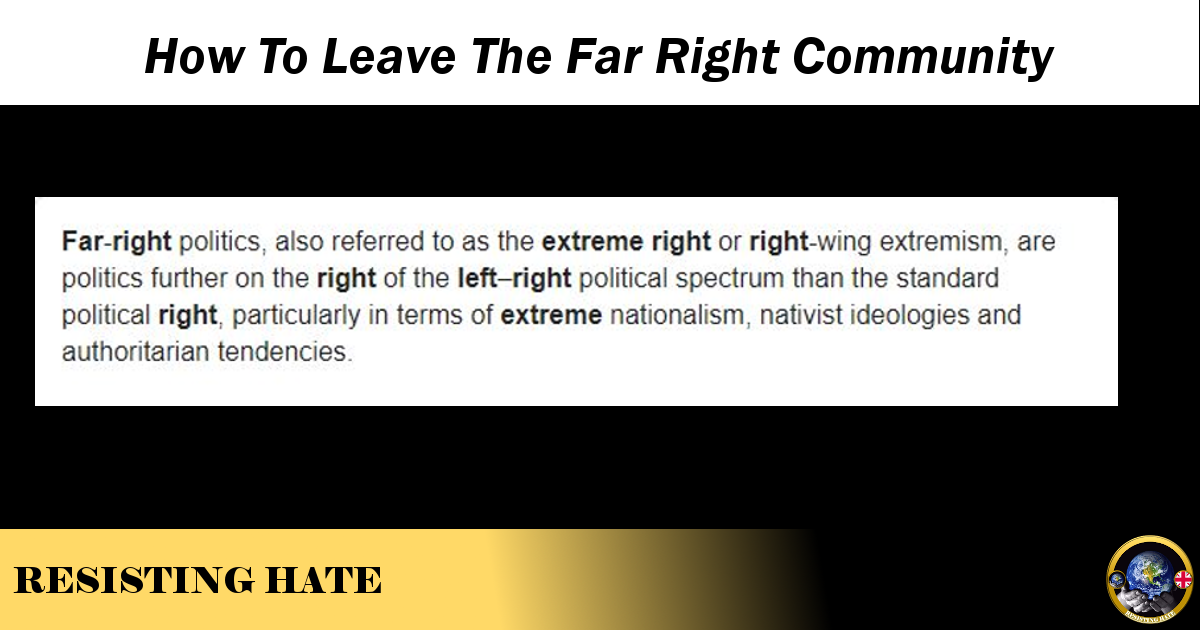 This is a guest article by an individual called Edward who has left the far right movement and who approached Resisting Hate asking if we could help him reach other people so he could educate them on how to leave the movement once fallen victim to the hate rhetoric. We were only too glad to help…

I am going to preface this article by saying that I am not a ‘member’ of Antifa, I am just someone who had fallen victim to ending up in a far right/third positionist echo chamber and community.
Yes, this would be the real far right, open ethno-nationalism, fascism and racism/anti-Semitism.

If you are struggling or conflicted about what you are involved in, know you are not alone, there are good people in the nationalist, fascist and ethno-nationalist circles that are just lost, just like I was. My story will come afterwards though. If you want to leave you have come to the right place, you are better off getting out while you are ahead, and putting it down to a bad time in your life, and moving on.

Step 1: Delete all nationalist/ethno-nationalist/fascist content from your PC/Phone etc. If you have memes and propaganda videos and other eBooks which glorify falsehoods, delete them, don’t tempt yourself to possibly going back into the community by keeping any, this is the first step to moving on.

Step 2: Delete all social media accounts (Twitter/Telegram/Facebook), streaming accounts, video platform accounts and any other accounts which you have used to engage in far right/third positionist content and conspiracy. You will feel better knowing that they have gone, and you will start to feel relief. Take several days to weeks off social media all together, even personal non political accounts, you will start to engage much better in real life events etc.

Step 3: Quit any parties you are part of. Leave them and don’t look back. Move on.

Step 4: See things from a regular person’s perspective. The weaponised half truths you believe now do seem mad and downright awful to the average Joe. Of course the Holocaust happened, of course race IQ differences aren’t factually accurate, they are pseudo-science, Democracy is the best form of government, after all, do you want your rights stripped away?

Step 5: Lastly, exercise more and get outdoors. Distract yourself, with any hobby you want, to fill the void that the toxic hate community filled previously. I know for me it was that community which filled the void in me which ended up drawing me in. That community is powerful and gives you purpose and meaning. It’s an addictive loop of hate and hero worship of historic cult figures (Mosley and other fascist leaders).

How they lure you in

The state of social media right now and with everyone at home, this has created the perfect storm for making people veer off to the fringe of politics.
People have exploited the nature of lockdown as well as Black Lives Matter, and have ramped up efforts to garner support through online hate circles.
All it took for me was following one or two accounts from a Black Lives Matter post, started catching on to what they were posting, and seemingly days later, was immersed in racist and ethno-nationalist posts. Usually it is racist imagery and anti-Semitism, it seems like there is a massive rise in anti-jew hate, which is truly abhorrent. It’s coming back pretty hard and quick. Within the far right hate circles (which span worldwide, this is not just a British issue, there are people from all over in this circle of hundreds of thousands of accounts), anti-Semitism is the most prevalent form of hate, people would think it is anti black hate but that’s really at the low end of the scale.

A lot of the people in these circles are young people, autistic people and people who openly claim they are aspergers. This is a frightening situation, there have been articles about this over the years, and I can confirm this is the case.

If you are a parent reading this, please make sure your kid does not have the app telegram on their phone. This app is used legitimately by many people, especially so abroad, but it’s more so used by the fringe right as a means to share Hitler worship videos, anti-Semitism and racism. It’s literally full of channels sharing Hitler speeches and such. People are more openly racist on this app instead of Twitter as they know they will get banned quickly on Twitter.

Get rid of Telegram. It’s not necessary when there are other means to communicate with family and friends.

In closing, I wish you well on your journey to quit and I think you will not look back one bit, once you get your life back.

Just to add, Resisting Hate are always willing to help and support those who find themselves in far right circles but who need help to leave. Anybody can make a mistake and get involved with the wrong people and it is never too late to get out. We have people in RH who used to be in the far right (and so do Hope not Hate) and who have turned their lives around and seen hatred as the danger that it is. Please don’t ever think you are in too deep. If you want to make changes, there are people who will help you.

We regularly intend to tell enlightening narratives by you about fascist activist knuckledraggers ending relations under Nazi backing. Your stereotyping tactics effect virtually everyone and normalise disorder. Kindly await the extracts which have interesting true exposes.

We’ve revealed in this text everything now, because you know a truth exists whilst hope is there. Education and nuanced debate support this, exclude violence. Extremely judgmental approaches mean everyone’s silenced, this helps extremism spread and drives considerable unrest, negatively tainting society.