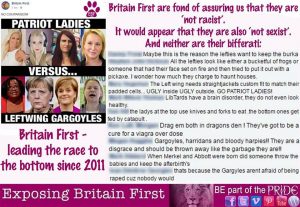 Thought I would give you all a run down on what is one of the most prolific right wing groups operating at the moment…..Britain First

Now, on the face of it, most peoples introduction to Britain First is on their Facebook timeline where you see photos of the Queen, Princess Diana, a soldier etc along with the phrase “like and share us and this post if you respect our soldiers/think the Queen is wonderful/Princess Diana was the queen of hearts etc….There doesn’t seem to be anything sinister about this however if you scratch just below the surface you will find a huge amount of hatred and bigotry. To understand why, you have to look at their roots.

Britain First formed as a splinter group of the British National Party in 2011, by a man called Jim Dowson. I will be writing about him in detail in future, but needless to say with his anti abortion activism and BNP membership he isn’t a nice character.

Now we come closer to the present day, where clickbait and a large amount of funding on advertising has led to the numbers of “Likes” on Britian First surpassing the 1.5m mark. They celebrate this total, saying that this makes them the largest “political party” on Facebook. This is all well and good, but when you look at their photos and videos it is clear that the same 15-25 people turn out for every event, not something that they seem to shout about as much.
The lower numbers however cause another cry….that normally occurs when they are confronted by either Muslims….usually outside the shops, mosques or restaurants that they are targeting, or any Antifa groups. Their members can normally be found moaning within their groups about what is happening or, sometimes, also to abuse people who follow the anti-Britain First pages. (have a look at Exposing Britain First & IRBF – they produced the memes and posts I’ve attached as screenshots)

The “days of action” that the activists in Britain First have been on have got them in hot water legally. Not only have they been told off while out on the street by the police and passers by, but more recently Jayda Fransen (Deputy Leader) & Paul Golding (Leader) have had to sign on at the weekends at a police station and has sanctions about where they are allowed to sleep overnight, what areas they are not allowed to go to etc.. caused by mosque invasions and suchlike. Paul Golding was recently sent to prison for breaching the Court Order that they had in place forbidding them from going into a mosque or inciting others to do so….he was banged up over Christmas, something that the right wingers were very angry at (shame).

In some ways, worse than the street “work” that Britain First do, are the stories that they have been posting on Facebook, Twitter and their website. Facts seem to be something that they really don’t understand. They have many different articles they post but they fall into just a few categories:

1. Blatantly “white pride” – they have been known to share photos of a white, blonde haired and blue eyed family with the cautionary tale that the “white race is at risk of being diluted/becoming a minority in the UK”. Obviously this is a load of rubbish.

2. News – while Trump has spent the run up to and first month of his presidency passing out “alternative facts”, this is something that Britain First have been doing for a while now. From jumping to conclusions (a shooting happened, it is all down to islamists/ISIS/Immigrants) but when the truth is announced that it wasn’t the right assumption, they don’t even remove the post…it remains there and people still continue to comment. I have seen it where the comments continue to be made for days after the truth comes out, normally with either everything being a conspiracy that the news media don’t want to tell the truth to appease Muslims or that the white person that carried out the attacks had been influenced by Muslims in some way.

3. Mock Outrage – The Britain First leaders are fond of doing their little pieces to camera. In recent weeks we have seen Golding standing outside a shop in Telford which they stood outside of and told their followers that the owner was an ISIS supporter. This was based on an Islamic symbol which had been placed on the shop front by the owner, While the symbols are shown at the centre of the ISIS flag, they have been used for the last 1500 years and just simply says “God’S Messenger Mohammed”. Now, this may seem like a small thing, but the message has been shared 5,000+ and seen by more than 400,000 people……and Britain First is planning on having a “Day of action” in Telford later in February….and you can bet that they will go back to that shop to cause issues.

4. Downright lies – Britain First have been causing issues with things that are blatantly untrue. For example, they posted a photo of Emma Watson (of Harry Potter fame) wearing an islamic head scarf with the tag line that she was a typical lefty traitor…..however, a look at the photo in detail shows that the scarf is slightly out of focus and the face is fully focused……..and then a simple search online shows that the girl in the photo is someone else and Emma Watson’s face has been photoshopped in place. There are countless more….far too many to even mention here.

5. No consideration – They have been asked by the family of a soldier not to use their image in their posts on the page but they have refused to think about that and have instead continued to use it. This is not the first time that this kind of thing has happened, they use various images on their posts and on their merchandise which should not be there and discard any thought of reconsidering using them.

6. Links – Britain First are linked to a great many rather nasty groups. Their members are openly racist and came to them as also members of groups like The NWI, EDL, NBU and suchlike. They also seem to have a really weird fixation on overseas groups, not only Knight Templar International (headed by Dowson I mentioned earlier) which are based here but who go to places like Hungary to provide military equipment for anti Muslim paramiliraty types, but also the toadying and fawning over Donald Trump and even Putin….who they seem to revere as a god.

So, ladies and gentlemen, that is Britain First in a nutshell. If you can, take a look at Exposing Britain First and IRBF as they are set up specifically to fight against the nonsense that is on the Britain First page and website.