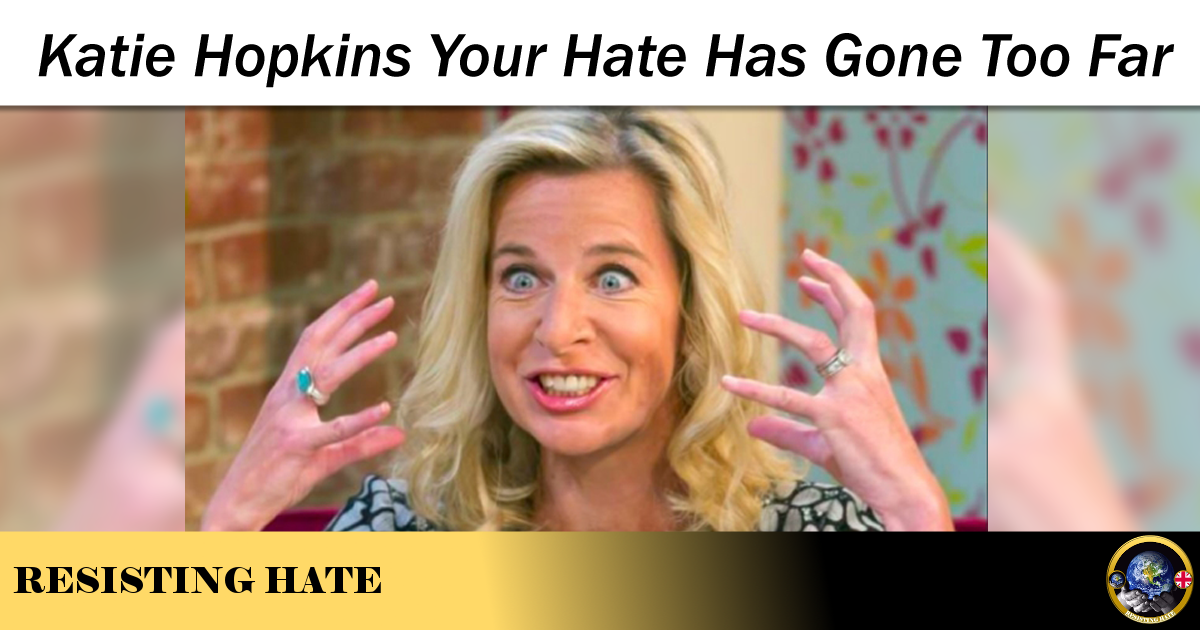 Accustomed as I am to reading the attention seeking articles and tweets from Katie Hopkins with a sharp intake of breath, her online antics this week have taken me even closer to an apoplectic asthma attack than usual.

Few of you will need reminding of the tweet I am referring to:

It is important to put some context into this. This isn’t an isolated example of a journalist having a strong opinion and expressing it unwisely, this is the latest in a garrulous and spiteful sequence of online hate tweets, abusive newspaper articles and bigoted radio appearances displaying mockery and cruelty to people from different community groups to Ms Hopkins herself. It is, in short, hate speech.

Ms Hopkins rejects the idea of online hate speech. She claims “There is no such thing as online hate crime. Just cowardice and illiteracy from intolerants.” Ms Hopkins is wrong. Hate speech is defined by the Oxford English Dictionary as “Abusive or threatening speech or writing that expresses prejudice against a particular group, especially on the basis of race, religion or sexual orientation.”

It is my belief that all these tweets published by Katie Hopkins fit this definition of hate speech.

The laws of the country relating to hate speech are clear. The 1986 Public Order Act states:

This was amended with the 2006 Racial and Religious Hatred Act to add “A person who uses threatening words or behaviour or displays any written material which is threatening, is guilty of an offence if he intends thereby to stir up religious hatred.”

I would argue that this recent tweet by Katie Hopkins and indeed many of the older tweets in her Twitter time line are in clear breach of UK law.

There are good reasons why we have laws against hate speech. The laws are there to protect the persecution of innocent people and to promote safety and security in society by prohibiting speech that may incite public violence. When we allow Katie Hopkins (or anybody for that matter) to openly, consistently and publicly flout the laws of the land we are risking not just the security of the people but the integrity of the UK legal system itself.

I would be prepared to bet that Katie has no stronger personal views on the Islamic celebration of Ramadan than she has on any of the topics she so freely espouses with her trademark venom. She jumps on the bandwagon of controversy with any topic in the news (see her disgusting comments on the parents of Madeleine McCann) and sees making cheap Islamophobic jibes as a way to raise her profile. Such hate rhetoric is ignorant and dangerous enough when spouted by the small fry Twitter accounts that Resisting Hate often get suspended. Talk like that coming from a journalist employed by the Daily Mail, the most read newspaper in the country, takes danger to simply unacceptable levels.

Many people say the only way to deal with Katie Hopkins is to ignore her. I disagree. I am not willing to ignore hate speech published in the newspapers and social media. I am not willing to allow our Muslim communities to be slandered with these lies and hate inciting tweets. I am not willing to turn my back on this rubbish and neither should you be. We have laws in this country for a reason. This woman has broken these laws time and time again and she needs to be held accountable for her actions.

If not now, then just when do we draw the line? Just how much hate are we going to watch Katie Hopkins spout before enough is enough? I have reported her to both the police and Twitter. If you agree with me that she is guilty of hate speech then I suggest you report her as well.

2 thoughts on “Katie Hopkins Your Hate Has Gone Too Far”