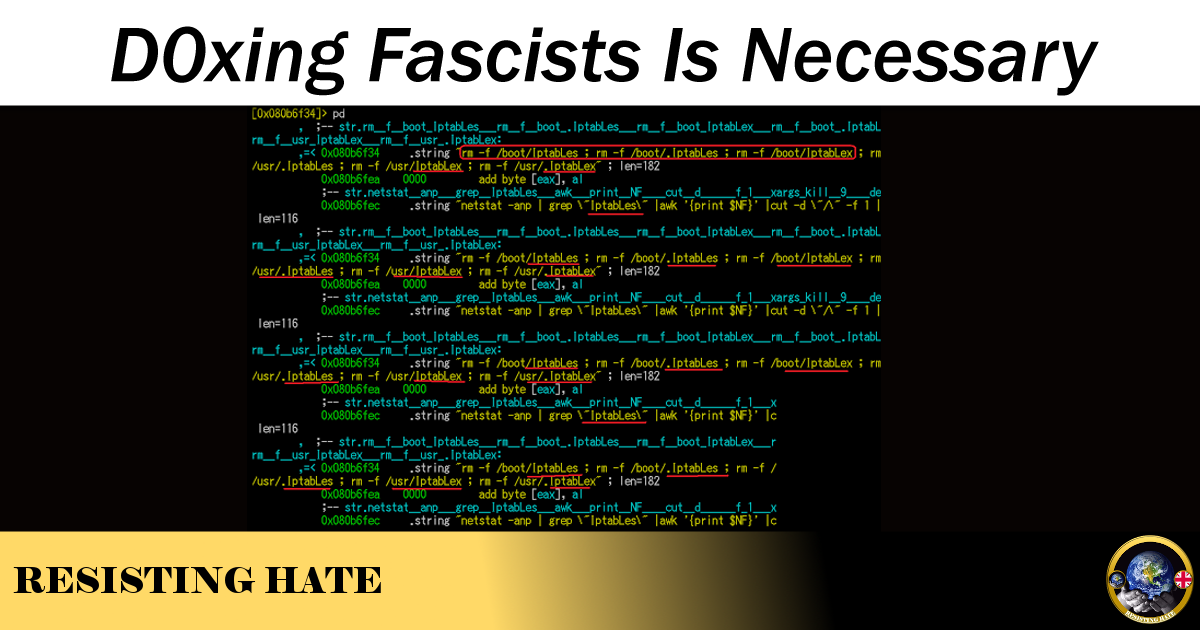 Edited 24.1.2018 I have updated this piece by highlighting in bold some key parts and have added some new text (in italics) to clarify some of the points in the original article.

D0xing (doxing, doxxing) is a predominently online term used to describe the obtaining and publishing of identifiable personal details on the internet. D0xing can involve anything from a quick glance at a Facebook page to a highly complex tracking process where information is gathered from numerous sources and pieced together to provide a trail to the identity of a sought after individual. D0xing, simply put, is making the anonymous known.

It is no secret that Resisting Hate and many other anti Hate or Antifascist organisations make use of d0xing as a tool with which to fight bigotry and fascism. We use the information we uncover to pass details of racists to their employers and/or family members. Basically we d0x to name and shame individuals who use covert and anonymous accounts to spread hate.

To be clear – although we do support d0xing we do not support publicly posting the details of individuals to put them at risk. We will pass details to police, law enforcement bodies, other hate groups and individuals associated with the hater but we do NOT post their details and call for vigilante justice or violence. We do not put people at risk, we do not share their private information publicly and we do not post their addresses or pictures of their families.

D0xing can be undertaken using both legal and illegal methods. The methods our group use are all currently legal under UK law (though I’d be lying if I said we haven’t been passed info from other, less ethical, sources – although any information which we are aware has been illegaly obtained we will not use.) Naive users of the internet have little idea how to keep their identity secret and (although I’m not going to give away the tricks of the trade that have painstakenly been explained to me) even more sophisticated internet users often leave some trace to their real identity. Even down to the prats who email abuse to our website without twigging that it will ping us their IP address…

However I am deeply concerned that the proposed laws described in this article will make it harder for groups like ours to legitimately go about the business of fighting hate. If d0xing is criminalised then the tracing processes we use will become criminal activity, as will the act of us passing information to third parties.

It could be argued that people have the right to privacy on the internet and to an extent I would agree with that. But the people we are committed to exposing are people not using but abusing that right to anonymity. We are talking about troll accounts deliberately created with no other purpose other than to hassle, abuse and threaten innocent people. Or Neo Nazi accounts publicly calling for genocide. We traced one account where the account holder was filming himself in acts of sexual abuse against a child. We passed those details to the police. Under these new proposed laws we would be unable to legally obtain and pass on the information that we often send to law enforcement channels.

Not just d0xing itself but the threat of d0xing acts as a deterrent on the internet. If people know their personal details can be legally obtained and passed on they they will in many cases self censor and not post the views and images that currently would cost them their jobs.

We have seen people hounded to suicide by evil minded trolling on the internet. This behaviour is not the “hurty feels” the far right dismiss them as, it is consistent targeted bullying of the worst kind. The perpetrators of this hate and harassment will face no sanctions if the ability to out them is restricted by the law. If organisations like Resisting Hate are going to be arrested for screenshotting fascist hate then the only people who will gain from this change in legislation will be the extremist rightwing trolls who still won’t be arrested for posting incitement to hate and violence toward others.

The naming and shaming tactic of d0xing may sound unfair but remember these are individuals who have chosen to post hate. We do not photoshop or alter images, we send only genuine examples of hate to relevant third parties. Anybody who worries about being d0xed or would prefer not to lose their job through calling for genocide on an open social platform knows exactly what actions they need to take to prevent it –  Don’t post hate in the first place!

8 thoughts on “D0xing Fascists Is Necessary”